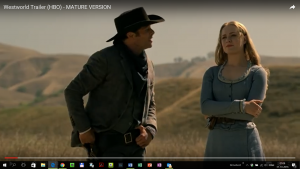 Hbo has recently launched the TV-series called “Westworld”. In (ultra-)short it’s about a western amusement park populated by androids. Humans can visit the park and treat the surroundings and the androids according to their pleasures and desires however bizarre they might be. The administration of the amusement park cleans up every night and resets the andrids for the next day’s visitors.

A group of androids starts showing a kind of independence which is not a result of the programming but due to the ability of remembering and reflecting on their world. They start raising the question “who am I”. The interesting thing is that the perspective chances from human to android. A point-of-view which indicates a chance in the way we, as humans, look at our own understanding of ourselves. In a short time, we will enter a reality where we might mirror our own identity to some kind of artificial intelligence and not only to other human beings.

5 Comments on "Who am I – a new perspective"

Editor
Eva Krarup
Hi Lars, interesting, so in a way Westworld depicts a development from division and exploitation (the humans exploit the androids) to a new kind of unity (the humans start mirroring the androids and become more alike)? Would you say that the shift in perspective from human to android facilitates what Herbrechter and Callus call a posthumanist reading? (I am here thinking especially of their question of whether it is possible to “read”/analyze from a position of analytical detachment in relation to the humanity (p. 95) and their statement on the same page: “To read in a posthuman way is to… Read more »
Vote Up0Vote Down  Reply

Author
Lars Juul-Madsen
Hi Eva, Thanks for your comments. I think that the shift in perspective goes exactly along the road which Herbrechter and Callus calls a post human reading, because looking at yourself through the eyes of an android is a way of “reading yourself” in a not human way. You get closer to the overarching perspective where you are able to question your former self-understanding. And, as I have commented in my replay to Johannes, is the new perspective “how can I as a human be as perfect in my relations to others as I experience the android’s are?” or is… Read more »
Vote Up1Vote Down  Reply

Thanks for this Lars. Sort of like a Turing test in nested realities…. The show seems to rehearse well-worn questions about free will and consciousness, albeit in an interesting way. Is the question ‘who am I’ not an archetypically humanist one? I take your point about mirroring through AI rather than HI though.
Herbrechter & Callus are probably correct that scifi is “a cryto-humanist genre”.

Editor
Johannes Poulsen
Thank you for daring to bring up an example that we still know very little about. The series have taken a couple of interesting turns in its first five episodes. For example, what we might have seen as tensions between humans and androids turns out to possibly be tensions between different generations of humans. It increasingly looks like a show that does not fit with the idea of a “crypto-humanist” genre (and there are endless exceptions to this claim), where the “posthuman moment” grows ever longer. I also think that contemporary video games need to be taken into the discussion… Read more »
Vote Up0Vote Down  Reply

Author
Lars Juul-Madsen
Hi Johannes. Thanks for your comments. I think AI in connection with the human look given to the androids’ changes fundamentally the way we will see ourselves as humans. The difference is, that we may be able to distinguish between androids and humans, but we will find it difficult to see ourselves as superior to the androids. We have been used to look at robots as potential monsters due to their possible ability and volition to hurt us. AI will potentially change our attitude because our aversion will raise from the flawless intercourse the robots’ offer us, which will exhibit… Read more »
Vote Up1Vote Down  Reply