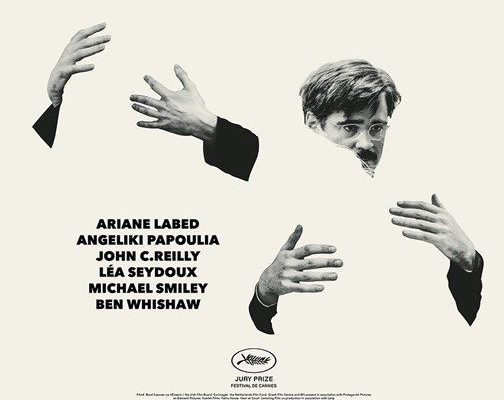 In The Lobster1, director Yorgos Lanthimos presents an surreal futuristic dystopia2 where the division in human unity runs through coupledom & singlehood. To be single is to be destined for beasthood. Marriage is an obligation enforced by the security forces, and those who become single due to death or divorce, spend a month at a seaside resort during which they must find a partner. Failure to do so results in transformation into the animal of one’s choice, and the search for a mate of the same species can begin anew (a lobster is the choice of the male protagonist, played by Colin Farrell).

Unfortunately, the film loses interest in this animal-transformation premiss (as is well-known, animals exist because of human failings in both the universe of Plato’s demiurge in the Timaeaus3, as well as in religious systems which include all samsaric beings within one system of rebirth).

Narrative impetus is provided by the ‘loners’, fundamentalist singletons who live feral in the hotel grounds, and are hunted by the other guests at night. They indulge in guerrilla warfare and are opposed to sexual regulation and tyrannical monogamy. However, the avenues of rebellion are just as regimented as those of conformity, and this community has its own rigid rules.

In this, as well as in the flat performances of the spell-it-all-out scripts, there is a distancing technique, and one that practitioners of posthuman theory might well want to take to heart. For in striking at the belly of the (humanist) beast, we are often merely engaged in stroking it.

4 Comments on "The Lobster: To be single is to be beastly"

Member
Haiyan Lee
“In striking at the belly of the (humanist) beast, we are often merely engaged in stroking it.” Well said! I liked “The Lobster” a lot, especially its deadpan humor, but was also disappointed that human-animal metamorphosis is not exploited more fully—dramatically or philosophically—other than having the protagonist keep a pet dog that is formerly his brother, and other than a brief conversation about the mechanics of the transformation itself. Instead, the dramatic tension centers on the warfare between the monogamists and the loners. The latter may lead a feral existence, but their regimented lifestyle has all the trappings of a… Read more »
Vote Up1Vote Down  Reply

“Thus humanity may be divided, but is still united in their abhorrence of the beastly existence”. Dear Haiyan…thanks for your insightful comments, and for putting so succinctly what I omitted as I think I tend to focus on the animal aspect a bit too much. The restored humanity through love & resistance is decisive, yes.

Editor
Johannes Poulsen
Thank your for what reads like a very precise and artful review of the film. “In this, as well as in the flat performances of the spell-it-all-out scripts, there is a distancing technique, and one that practitioners of posthuman theory might well want to take to heart. For in striking at the belly of the (humanist) beast, we are often merely engaged in stroking it.” – How should we go about doing this? Sometimes posthumanist theory (which I suppose is what you mean here) can feel like an endless line of critics showing us how those before them didn’t get… Read more »
Vote Up0Vote Down  Reply

Author
Leon Human
Hi Johannes, & thanks for your comments. There’s easy and then there’s ‘easy’. In my current (physical) academic milieu, it’s easy to make such a point as the very term ‘posthuman’ is ridiculed, not to say the academic enterprise centred around it. In this space, it’s less easy but still do-able. As a postgrad, I once tutored in an education department in pre-Mandela South Africa that used a SAM model of knowledge (synthetic, analytic, metaphysical). When I pointed out that this made Kant’s philosophy impossible, the reply was no criticism without a fully worked out alternative. I didn’t buy it… Read more »
Vote Up0Vote Down  Reply