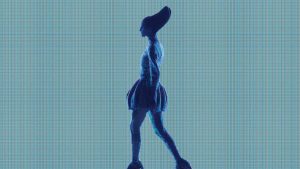 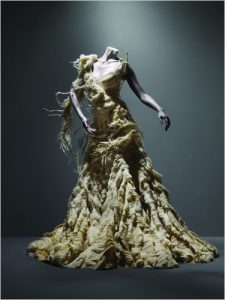 How can artistic practices set intra-actions with the non-human? How can they reconfigure the encounter between human-made and the Earth? In the face of the total control by technologies, artistic works have been undergoing a profound transformation, becoming co-depended on scientific, medical, and ethico-political factors that all construct a complex entity. In this manner this is a posthuman art that unfolds and deploys multiple patterns of subject’s “becoming” and its multiple interconnections. It appears that posthuman art practice corresponds to what Cary Wolfe indicates  as “a new mode of thought that comes after the cultural repressions and fantasies, the philosophical protocols and evasions, of humanism as a historically specific phenomenon”(XV)[1],

I think it might be useful to give insight into the nature of McQueen’s fashion assemblages to examine the complexity of posthuman art practice.  His projects rich with animal features and floral elements are, at the same time, moments of becoming-animal, becoming-multiple and becoming-molecular. And whether the designer drew his inspiration from biology or geology, the complexity of nature provided endless stimulation to his creative works; they are attempts to capture the unknown, often marginalised, forces and energies. It is crucial to highlight that these projects with natural adornments are not intended to make the garment more sophisticated but are to place all those elements in close proximity to one another irrespective of its roots and traits. Thus, his works integrate shells, feathers, antlers, animal skins and even taxidermied animals to bring the wearer into a molecular proximity. In point of fact, they are literally to cause the model’s body to become-nonhuman, activating not only the visual but more importantly sensual reception of his works.

McQueen’s posthuman fashion does not validate identities and institutions but rather enables new forms of action and bodily transformations. His projects make a shift in the conceptualisation of body from epistemological frameworks of signification and representation to an ontological framework of affect, sensation, and material transformation. In this manner, the works, almost in their ritualistic dimension, reconnect us with the outer world, opening up what has estranged and repressed us. From this perspective, the reasoning about what fashion is and what it might mean becomes immanent to our experience.

This is a very interesting post. However, I wonder if Wolfe would agree that incorporating dead animals is a truly posthuman move. Isn’t this approach just reifying a human-centered approach to the world that allows appropriation and exploitation of the animal in our practices and fashions? I’d be interested to know how you see this differently and what leads you to the conclusions you have reached, outside of the appearance of the clothing…