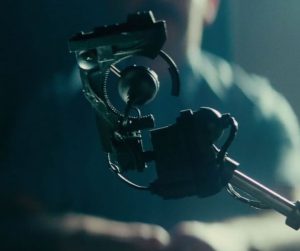 In the movie Blade Runner from 1982 a special interrogating technic is employed to determine whether someone is a human or a so-called replicant; an artificial human. The technic includes a device, the Voight-Kampff machine, which measures physical responses to ethical questions. The machine resembles in fact a lie-detector and the method as a whole looks like the Turing test, but increasingly advanced replicants challenge this system in the movie. Actually, the replicants sometimes seem able to beat the test, confirming the “The Chinese Room” criticism advanced in Wilson’s lecture. The validity of the test, however, becomes even more problematic when it is slowly revealed that the protagonist, an interrogator in the Voight-Kampff tests, might be a replicant himself. This begs the question; how can a non-human know what it is like to be a human? Even more mind boggling is the fact that the protagonist does not seem sure of what he is himself. The whole Voight-Kampff set-up now looks like this: a possible replicant with implanted notions of what it is to be human looks for signs of non-humanness in possible replicants. Maybe the film is suggesting that humanness is merely a constructed feature and that it has no genuine, material origin. Maybe human consciousness is never one’s own but always a system or a being-in-the-world provided by everyone around oneself.

Member
Jelica Veljovic
Hello Kristian! I liked your example because it perfectly fits the thematic related to the Turing test and Searl’s answer to it. Your final relation to Heifeggerian idea of “being-in-the-world” is very well shown in concept of “digital Dasein” and “digital ontology” by Jos de Mul. Having in mind that the world with all its components is a structural aspect of Dasein (or being-in-the-world), he concludes that nowadays, with development of cyberculture, we can speak about digitalization and virtualization of Dasein… maybe we could add to this the cyborgization of Dasein too. If you are interested, the book title is… Read more »
Vote Up0Vote Down  Reply