The consequences of technology is a central topic in the discussion concerning the posthuman, and I propose that critical design can function as a form for addressing the possibilities of the posthuman condition through conceptual artefacts that speculate technology and its impact on human and non-human agents in the world.

Anthony Dunne and Fiona Raby propose in their book: Hertzian Tales, an attitude or method for articulating and discussing possible futures and ideas through design, which on the basis of conceptual speculation and criticism unveil potential futures through these manifestations. Inspired by the Italian Radical Designers of the 70’s, Dunne and Raby term their practice Critical Design, and describe it on their website as the following:

“Critical Design uses speculative design proposals to challenge narrow assumptions, preconceptions and givens about the role products play in everyday life. It is more of an attitude than anything else, a position rather than a method.” (Dunne, Raby)

A way to illustrate what the scope of critical design is, one can understand its conception of speculative futures by interpreting futurologist Stuart Candy’s diagram of potential futures, in fig.1 below, which Dunne and Raby also advocates in their work: Speculative Everything. (ibid. 2013) 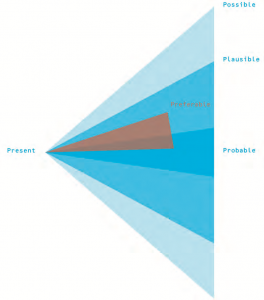 Because of the seemingly unavoidable development of technologies, interactive, computer-based systems, AI, and robotics, I therefore suggest not only a critical posthuman perspective to the analysis and speculation of the implications of technological artefacts and autonomous agents, but also to consider critical design as a relevant form for articulating questions concerning the posthuman.

One recent example of a critical design concept of robotic nature is Deltu, see fig. 2 below, a seemingly autonomous machine that will play the game Together with you, and even produce programmed human-like behaviour, such as distracting itself by taking a selfie, when you don’t play the game right. With a mirrored iPad interface, this artefact is also partly intended for learning with its embedded memory game, where the user learns from the interacting with the robot. 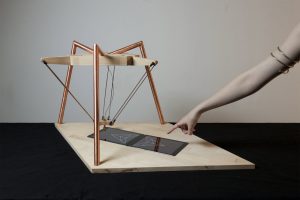 Deltu reveals a layer of embedded ideology in itself, with its programmed behaviour that function as an entertaining and aesthetic quality, uncovering the robot as a non-human agent that serves to please us with its behaviour, which can refer to the question of whether anthropocentric agency, embedded as behaviour in Deltu’s respect, for the sake of a anthropocentric agency of aesthetics, might be a preferable future, or not, as:

“Every era is defined by its technologies.” (Herbrechter, 2013)

Adopting a non-anthropocentric, or critical posthuman approach towards social robots and interactive technologies could contribute to a critical conception to acknowledge all human, non-human, and possibly posthuman, agents, and develop our understanding of the latter, through manifestations that articulate contestable futures, just as Deltu make visible how it’s subject to anthropocentric agency in its restrained mimics, not for the sake of functional value, but for aesthetics.

“if we could communicate with the mosquito, then we would learn that it floats through the air with the same self-importance, feeling within itself the flying center of the world.” (ibid.)

Herbrechter, Stefan. ”Towards a critical posthumanism”, from Posthumanism: A critical analysis, London: Bloomsbury, 2013

Member
Jason Hoelscher
Your line, “Deltu reveals a layer of embedded ideology in itself, with its programmed behaviour that function as an entertaining and aesthetic quality, uncovering the robot as a non-human agent that serves to please us with its behaviour,” seems pretty key here, as describing the way we embed or project our expectations onto our technology, which then influences how we interpret (and thus build upon) future influences it has on us. I often see a similar subtext in the way researchers discuss artificial intelligence, as if it will basically just do what we do, but much faster and with a… Read more »
Vote Up0Vote Down  Reply

Member
Helena Hunter
I agree with your advocation for critical and speculative design as a practical methodology for articulating questions concerning the posthuman. Your writing resonates with my post concerning an artwork Heidi Kumao’s Protest (2015) a pair of robotic legs programmed to resist and play with human expectations of robotic-human interaction. See here: https://open-tdm.au.dk/ph/2016/10/protest/ I think a posthuman praxis is one that seeks to provoke and ask questions about the posthuman rather than illustrate or represent posthuman thematics. Perhaps ‘posthuman aesthetics’ should be rephrased as a question in the context of this course, is an aesthetics relevant to the posthuman or is… Read more »
Vote Up0Vote Down  Reply

Member
Sine Lykke Hansen
Hi Frederik! I like your proposal to use critical design in order to bridge an understanding towards these quite unfamiliar aspects of (non-)life. I’m currently doing a lot of research through design in my BA, but only focusing on social interactions mediated through technology. I didn’t think about this approach used to understand the agents in the network, so thanks a lot for pushing my thoughts in this direction. I think, though, when we use critical design as a way of investigating the post-human, we’ll investigate ourself and also change in the process. Just like in the Deltu example you… Read more »
Vote Up0Vote Down  Reply

Your suggestion of making critical design a central strategy in relation to the posthuman is sharp and apposite, as I see it, and goes well together with that branch of posthumanism called “speculative”. Actually this critical attitude is what governs much of avant-garde art, which thereby becomes a sort of laboritory for critical design, exploring possibilities before they become actualities.