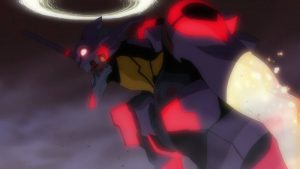 (Shinji inside the Eva Unit 01 in berserk mode)

The science fiction classic of Japanese animation called Neon Genesis Evangelion (1995) received a series of sequels in movies. One of them are the series of movies called Rebuild of Evangelion, the second of this series is Evangerion Shin Gekijōban: Ha (Evangelion: 2.0 You Can (Not) Advance, 2009). The scene I wish to highlight is when the angel consumes Rei along with Eva Unit-00 and Shinji tries to fight again. He fails and then he reactivates Eva Unit 01 in the berserk mode as an emotional response to the loss of Rei. Shinji defeats the angel and rescues Rei that is inside the angel. The Angel explodes and its remains along with Unit-00’s core are absorbed into Unit-01 fusing them all into one being. They transcend human limits and the Eva becomes a divine being triggering the Third Impact that means the end of the world. To transcend the materiality of the human its necessary the death on humankind to produce a unitary being, such is the Seele project Human Instrumentality Project. This would create a state of being for humanity where no individual existed; even identifying this being as a conglomerate would be incorrect, since there would be no such concept as an individual. The disembodiment and the immateriality are achieved through the human body/soul. This division opens the discussion of evolution with technologies such as Evas that incorporates souls and the pilot mind. Or such as Rei that is a series of clones of Shinji’s mother. Where are the actual bodies and where they go after?