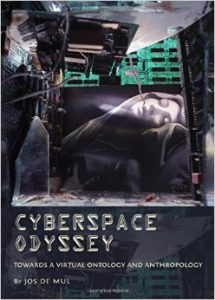 I have chosen to present a chapter from Jos de Mul’s book Cyberspace Odyssey: Towards a Virtual Onthology and Anthropolgy (Cambridge Scholars Publishing, 2010), in which the author deals with questions of changing philosofical concepts of the Self, the Being, the Home, the Identity, etc., which all comprehend the change within studies of anthropology as a study of human. The book chapter title is “Virtual Anthropology: Helmuth Plessner for Cyborgs”.

In it, De Mul parts from Plessner’s thesis from 1928, in which it is illustrated eccentric positionality as immanent to the human Self; that is why humans seek to jump out of the notions and categories, tending to radicalize its life form. De Mul finds that radicalization of the human eccentricity lies in the posthuman context and especially in development of virtual reality as a form of human’s possibility to overcome its own disadvantages. The ultimate dream is that one day telepresence and virtual reality will free man from his finitude and provide him with the atributes that had been only adscribable to “God-omnipresence, omniscience, omnipotence and immortality”. De Mul furtherly claims that VR and cyberspace are a revitalization of Platonism and Cartesian dream of overcoming the body as an imprisonment, in which he relates to the posthuman polemics on (im)materiality and (dis)embodiment.

Claiming that VR and cyberculture, as constitutive elements of posthuman context, provide us with policentric experience – not eccentric anymore – De Mul concludes that it is possible to discuss upon the omniabsence as a paradoxical side of the same coin. VR offers us radicalization of homelessness, unrooting and identity plays (developing multiphrenia in this sense), thus underlining the omniabsence of the subject and its identity. I believe that De Mul showed us how the posthuman subject has come to change its, until nowadays, essential social categories – place, time, language, body, dentity – revealing them as unsustainable in the new context.

Very interesting. Made me think of R. Kozinets Netnography where he deals with etnography online, actually one of the first academic books, in which i noticed the word cyborg. I think its very interesting topics especially time and place which i think Giddens has some good points in regards too. Also the construction of identity and how it changes with the countless possibilities online, being able to be anonymous for example or construct ones identity as one sees fit, regardless of true and false.

Dear Kim, thank you very much for the comment. i really didn’t know about Kozinet’s thesis on netnografy – fits quite well with Plessner’s idea on virtual anthropology. It is very curios for me that both of them, within the time frame of 70 years (considering the years of their published works – 1928 and 1998) spoke about cyborgs…