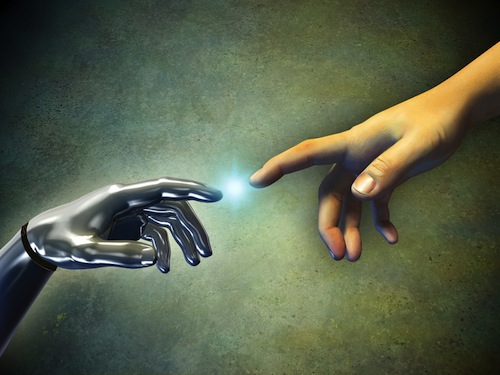 “Transhumanism is a modern expression of ancient and transcultural aspirations to radically transform human existence, socially and bodily. Before the Enlightenment these aspirations were only expressed in religious millennialism, magical medicine, and spiritual practices. The Enlightenment channeled these desires into projects to use science and technology to improve health, longevity, and human abilities, and to use reason to revolutionize society (…)” (Hughes, 2012)

The Politics of Transhumanism and the Techno-millennial Imagination, 1626-2030

An underlying view seems to be that transhumanism is an enevitable evolutionary development that has its roots in one of the most defining characteristisc of the human:
“As soon as hominids developed the capacity for abstract thought, they began to imagine ways that their life could be radically improved.” (Hughes, 2012)

Taking this thought on step further, it seems to advocate a view that humanity has always been fundamentally transhuman, especially if transhumanism is understood in the definition of the 1960’s futurologist, FM-2030: “(…)people who adopt technologies, lifestyles and worldviews “transitional” to posthumanity as “transhuman” (‘Transhumanism’ Wkiki-page)

It is written by James J. Hughes, an American sociologist and bioethicist, who together with Nick Bostrom, has founded The Institute of Ethics and Emerging New Technologies.
“Rejecting bioconservatism and libertarian transhumanism, Hughes argues for a third way, “democratic transhumanism,” a radical form of techno-progressivism which asserts that the best possible “posthuman future” is achievable only by ensuring that human enhancement technologies are safe, made available to everyone, and respect the right of individuals to control their own bodies.” (‘James J. Hughes’ Wiki-page).

This becomes clear in the article when he describes his view on our current situation and his hopes for the furture:
“Perhaps our global economic crisis, with widening class divisions and deepening unemployment, will create the context for a new technoprogressive synthesis of egalitarian millennialism and technoutopianism, with promises of universal antiaging and cognitive enhancement, a basic income guarantee and shorter work weeks, a postgender transhuman social democracy with world government.” (Hughes, 2012)

Hi Maja, thank you for the summary. What are your own thoughts regarding this “democratic transhumanism” that Hughes advocates? And his egalitarian ideas about a posthuman future with enhancement technologies available to everyone?

Author
Maja Tingberg Kruse
Hi Eva! Thanks for your comment! I’m not completely sure what to think of it. His vision seems nice, but taking human history and our current state of equality into consideration, it might be naive to think that new technologies by themselves would enable us to live in a harmonious relationship with eachother. Also I don’t think it is realistic to think that such a world would not create more inequality between those who choose to use the new technologies and those who won’t use them. What would prevent a kind of hidden tyranny on the (probably) minority of people… Read more »
Vote Up0Vote Down  Reply