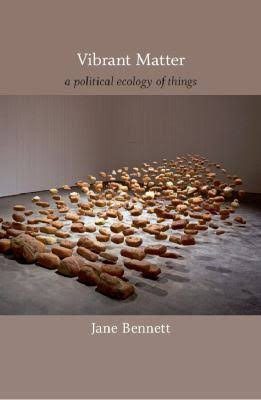 I would recommend anyone to read Jane Bennett`s Vibrant Matter, a political ecology of things. (2010) It’s a very readable book with plenty of personal, grounded and specific examples to keep it from floating too far off into the conceptual.

Bennett is attempting to give voice to a thing-power inherent in all matter in order to shift the focus away from an exclusively human-focused understanding of agency and autonomy. The book begins with her encounter with a constellation of debris one Tuesday morning in June, she writes:

Glove, pollen, rat, cap, stick. As I encountered these items, they shimmied back and forth between debris and thing-between, on the one hand, stuff to ignore, except insofar as it betokened human activity …and on the other hand, stuff that commanded attention in its own right, as existents in excess of their association with human meanings, habits or projects. In the second moment, stuff exhibited its thing-power: it issued a call, even if i did not quite understand what it was saying. (p.4).

Clearly the kind of the thing-power Bennett is articulating is a power besides or in excess of the human social and cultural meanings read into and onto objects. She is arguing for a kind of impersonal life force which is independent of human subjectivity and which infuses all stuff.

This is an understanding of a lively, interactive and shifty world of affects and is a nice example of how affect theory and posthuman theory serve each other. Moreover to my mind Bennett offers us a very grounded and convincing description of  how humans and non-humans have the ability to affect each other, the world, politics and (by implication) the trajectory of our futures.

She offers us in short, a deeply posthuman approach to seeing our now. Bennett`s effort is to re-angle the conceptual gaze onto non-organic matter and to illustrate a lively quality in these matters. However she does not ignore the human experience of the world or ignore questions of human responsibility. Instead she takes from Deleuze and Guattari the notion of assemblages and illustrates how the human is always already in affectual interaction with the material world of stuff and indeed goes further to argue that we can helpfully see ourselves and our bodies as also assemblages of lively matter, ourselves as constituting a vibrant materiality. Here the border between inside and outside and human/non-human is blurred.

Fundamentally Bennett`s mission is an ethical one. By training this kind of attentiveness toward the material world in which we live and of which we are a part, she hopes we will be compelled to act more carefully and with a greater consciousness of the powerful impacts of non-human elements on the environment and politics. In this way the hope is that we can stop our abusive and dominating behavior towards the non-human.

Member
Florian Auerochs
Thanks for introducing Bennett! Since I’m working on a new materialist account on plastic waste in the arts, I definetely have to make my way through Bennetts recent writings. I’m excited how to talk about thing-power when it comes to (plastic) waste. Bennett talks about the “lively quality” of things and thing-related “human responsibility”. Concerning plastic materialities, the material sociologist Gay Hawkins (also a Bennett-reader) wants the plastic bag to be “a participant in an emergent ethical constituency”. As plastic debris in the ocean is highly destructive matter – it minimizes oceanic biodiversity – it would be challenging to ethically… Read more »
Vote Up0Vote Down  Reply