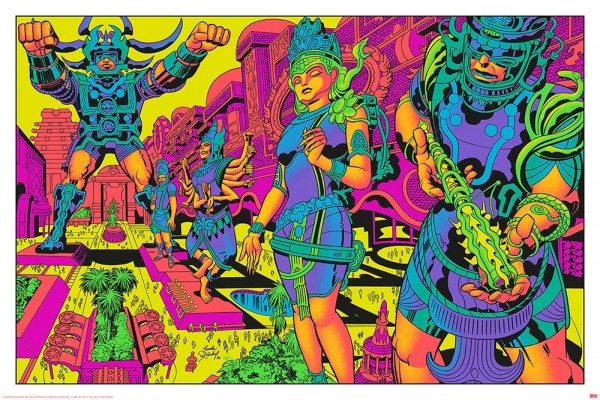 Earth is long since dead. On a colony planet, a band of men has gained control of technology, made themselves immortal, and now rule their world as the gods of the Hindu pantheon. Only one dares oppose them, he who was once Siddhartha and is now Mahasamatman. Binder of Demons. Lord of Light. (Blurb, Eos 2004 paperback edition)

Roger Zelazny’s “Lord of Light” paints a dystopian (although, it must be said, in an immensely humorous way) transhumanist future where technocrats have seized power through monopolizing the use and advancement of all but the most simple technology. In the eyes of the common people, these same technocrats are viewed as gods, and their tech-infused powers as divine magic. The book thus presents a scenario where the division of humanity into a sharply stratified (indeed the “Hindu gods” live in a vast walled city poised above the world of mere mortals…) society rests solely on the acquisition and sequestering of knowledge by a small elite—and the subsequent political use of that knowledge in attaining absolute power. In a through and through SF framing, the book sets an interesting scene in which the eventual occultation of technology (as far as the average citizen is concerned) brings about political change that the general populous can no longer trace as being a consequence of technological tyranny, but rather, over the course of generations come to view the rule of the omnipotent technocrats as, simply, the natural order of things.

Thank you for your post, I have not yet read Lord of Light but after reading your thoughts of it I surely will. Something that struck me though, is the choice of Hinduism as blueprint for the occultation of technology. Why adapt existing religious dogma and not create something new? What are your thoughts on that, why did the author use such a blueprint and which factors determined the choice?

Editor
Johannes Poulsen
Thank you for drawing attention to “Lord of Light”. I haven’t read it, but I find it very interesting that Jack Kirby (who made the illustration you chose here) was part of the attempt to make a film adaptation of the book. His works also contain a multitude of “Techno-Deities”, especially in the contemporaneous “New Gods” series and in his depiction of Galactus in the Fantastic Four (in whose likeness at least two of the figures in the picture above are drawn). American comics scholar Charles Hatfield writes extensively on this subject and it’s relation to Clarke’s Law and the… Read more »
Vote Up0Vote Down  Reply

Great post! I can’t help but notice, though, that something like this scenario has already existed in our own world. When the Spanish came to The New World in the sixteenth century they were, at first, greeted like gods by many of the local people, in part because of their technology advantage. Their guns made them into gods, so to speak. Do you think that technology always has had the inherent possibility of subduing people by its incomprehensibility?