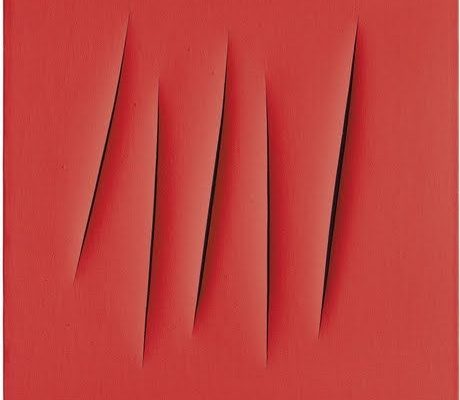 In his piece ”Expectations”, Lucio Fontana neatly represents a line of thought fitting with the theories of Chalmers’ Pan(proto)psychism/Russellian Monism, and, to a lesser extent, Tononi’s Integrated Information Theory, which I would argue is better examples of contemporary Dualist (if one prefers that monicer) theories.

Unlike Turings idealism, Searles, Dennetts, or Churchlands reductionist/eliminativst views, or even classical Cartesian Dualism, Chalmers – and indirectly, Tononi as well – argue that consciousness is neither a mere illusion, or a recursive homunculi, but that they are one and the same: That matter itself contains some degree of qualia, proto-qualia, or facilitates a system of information necessary for experience, and thus that it is not simply a question of ”programming the machine”, as Turing puts it, nor of ”leaving behind the particularity of the human point of view” in the same sense as Nagel uses it. Rather, it becomes a question of explaining both; how the human, animal, and mechanical machines are programmed, and how a distant view can facilitate an understand of them all; how they’re ultimately born of the same cloth.
The biggest obstacle for the theory, however, is explaining how matter then combines into greater levels of consciousness.

It poses the tantilizing posthuman question: Are we, then, truly so unique? Or is the consciousness of those with a different grade of consciousness merely invisible to us?
And if they are, how could a Turing test ever prove consciousness, even if we ignore the grounding problem, unless we happen upon a graded consciousness equal in measure to our own?

Another example of this merger of dualities is also neatly summed up in “The Hitchhikers Guide to the Galaxy“. More specifically, the Whale and Petunia:
Here we follow the birth of one naive and – to us – unfamiliar type of consciousness (the Whale), hurridly embodying the experience into its material consciousness before its untimely end, and a familiar consciousness (explained in the book; won’t spoil it), disembodied and immaterial:

Editor
Alexander Wilson
I agree that Tononi’s theory of consciousness as integrated information does offer a way beyond the apparent impasse in contemporary philosophy of mind. I am very fond of that theory and have actually written about it in a forthcoming issue of Theory, Culture, and Society, on the New Materialisms. You mentioned the “combination problem”, but actually the theory, as I demonstrate, does a good job of resolving the traditional combination problem, usually attributed to William James’ discussion of the “mind-dust” problem. This is because of IIT’s principle of exclusion: complexes with a higher index of Phi suppress their parts with… Read more »
Vote Up1Vote Down  Reply

Author
Mads Søndergaard
Cheers for the reply! 🙂 It is, indeed, very interesting, especially in light of it being the nigh-on only testable theory we have thus far, as far as I recall, and it does indeed proffer a solution to how primary components of matter can “communicate”, to stay in the sphere of William’s own metaphor on the matter. My only real issue with the theory, is that it, perhaps, focuses too much on answering the “Hard problem”, rather than identifying it’s constituent parts. That is, it explains how the physical can give rise to the phenomenal – how the item is… Read more »
Vote Up0Vote Down  Reply