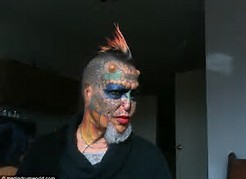 Meet Eva Baphomet Tiamat Legion Medusa. It (preferred pronoun) recently made news for removing its external ears and nose to further its modification into a dragon (Madre Tiamat). Its case interests me as a posthuman experiment at embodying the Other.  It radically transgresses ideas of gender as a preop transgender woman, but also ideas of species as it extensively reworks its body in order to claim a reptilian identity. I think that gender first is intriguing, since sex is embodied, but gender, well, gender is fluid, manifesting in different cultures and among different peoples in different ways. However, how much is the idea of species physical and how much is perception? Both Nagel and Churchland explore this idea in their articles, but neither has committed to the experiment as thoroughly as Tiamat, who has taken on the role of dragon. Still, is the dragon true of it? Or not? Since dragon are mythical creatures, can one make the dragon true of oneself? Can removing one’s physical ears and nose enable one to “see” heat with one’s tongue?

4 Comments on "The Posthumanist Art of Embodiment"

Editor
Eva Krarup
Thank you for this example, Maria. It is really a radical example of someone trying to transgress its own experience of being human. It would be interesting to know whether Eva itself (to use the preferred pronoun) experiences these outer but permanent changes as some that have successfully led to the hoped for transgression of its previous experience of being. Another thing that struck me; on the Facebook page you have linked to Eva writes that it changed its body to look different than the norm of a human, but that rather indicates a hope for changing our norms than… Read more »
Vote Up0Vote Down  Reply

It certainly has changed its identity in many ways. It would seem that no bodily changes would change its reality as a human, but dyed corneas and modified ears and nose would change its experience sensorially and maybe in some ways its consciousness of itself? It’s an interesting attempt to become something that one can never achieve, but isn’t that the ultimate heartbreak in any art?

If anything is clear from explorations such as that of Nagel’s, and even Churchland’s critique of Nagel, it is that different physiologies should produce different experiences. I wonder whether and how Tiamat’s experience of the world has changed as it has transformed its physiology (at least superficially)?

Author
Maria O'Connell
I don’t know. It doesn’t really talk about that, which I find fascinating. It seems to focused on the physical appearance of the dragon, as opposed to really inhabiting the (imagined) dragon being. It seems that, for Eva Tiamat, the experience of Othering is more the point of the experiment rather than a real desire to have the senses or the experiences of Tiamat. However, the desire for Goddesshood is a part of its empowerment, and certainly the shape of nostrils and lack of external ears would make a difference in how the world is experienced, but I don’t know… Read more »
Vote Up0Vote Down  Reply