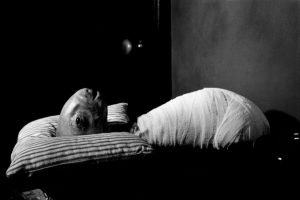 The above still is the baby from Lynch’s movie with the fitting title “Eraserhead” (1977). The first scene is set on the moon where we get a glimpse of a manlike being. Next scene we move to the protagonist who’s having a baby later in the movie. The baby’s appearance turns out incomparable to the human race. The baby as a concrete “Other” is entirely neglected and during the movie it slowly erodes and maggots begin to feast on it. I would venture that the movie proposes an evolutionary question about birth and how humanity would react if we would start changing radically in a biological way instead of a technological one.