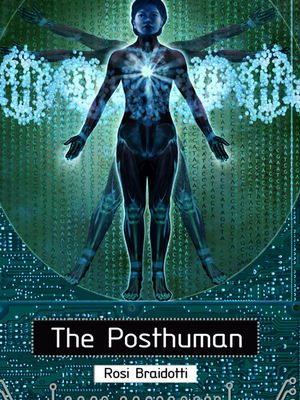 One of the books that I find most interesting about the posthuman challenges is The Posthuman by Rosi Braidotti, 2013. In the book, you can find several different approaches to the posthuman: as a theoretical field that goes beyond the species and notions of self and humankind, questions of the inhuman and death and the posthuman as an approach to life itself. Is a book that covers the major subjects around the posthuman and can be an interesting material for research.

Posthumanism is the historical moment that marks the end of the opposition between Humanism and anti-humanism and traces a different discursive framework, looking more affirmatively towards new alternatives. (p.37)

Braidotti defends a posthuman position that builds up on the anti-humanist legacy, in particular that of the post-structuralist generation. Also she envisions a theory that encompasses an integrated posthuman theory, including the scientific and technological complexity and the implications to political subjectivity and forms of live and governance. As my indication is a book, I will recommend the first chapter specifically called Post-Humanism: Life beyond the Self. The chapter talks about humanism and the questioning of the post-structuralist movement and social movements, such as feminism.

Acknowledging that reason and barbarism are not self-contradictory, nor are Enlightenment and horror, need not result in either cultural relativism, or in moral nihilism, but rather in a radical critique of the notion of Humanism and its link with both democratic criticism and secularism. (p.46)

Its a chapter about how the humanities continue to ask the questions about the epistemological and political implications of the posthuman predicament for our understanding of the human subject.

2 Comments on "Post-Humanism: Life beyond the Self"

Member
Sofie Reimer-Walsted
Hi Ângela! I just wanted to thank you for choosing Rosi Braidotti as your author of choice and I am very much looking forward to diving into “the posthuman” when I’m done with this semester. “Reason and barbarism are not self-contradictory, nor are Enlightenment and horror”. What a beautiful way of stating the need for a riot against the dialectic and dualistic. I also really enjoyed her text ” Posthuman, All too Human” in which she nods at Haraway and very poetically “meshes” (Im sorry for making this Morton “joke”, had to) their thoughts together on her creational path towards… Read more »
Vote Up2Vote Down  Reply

Hi Ângela, thank you for your recommendation and comprehensive description of Braidotti’s book. I am still new in the field of post-humanism, but I have often been told that Braidotti’s texts are a good way to enter the theories and debates. I find her focus on the integrative aspect of posthumanist theory especially interesting. So thank you for pointing that out.