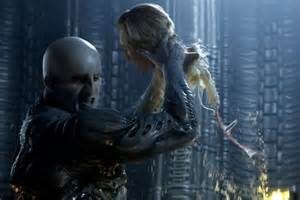 In the prequel to the Alien series of movies, Prometheus, we see what Herbrechter

and Callus would term”the posthuman ‘other’ and how it “tap[s] into the long history of humanity’s excluded (the inhuman, the non-human, the less than human, the superhuman, the animal, the alien, the monster, the stranger, God….)” (97).  All of these figures are in the story, as the human  (and android) spacefarers go to an alien planet searching for the roots of humanity and perhaps our creator/God.  However, what they find is something entirely incomprehensible to them and incommensurable with any of their narratives about what they will find. Carey Wolfe, in What is Posthumanism, says that “what language is and how it is related to our subjectivity, consciousness, and the like…cannot be addressed without investigating our assumptions about what knowledge is and the kind of knowledge we can have or ourselves and of others [including nonhuman others]” (31). The film examines these questions by introducing a number of different languages (the language of the Engineers, the genetic code that identifies them as human, the digital mind language of David, the android, and the language of myth that  couches the expectations of each member of the crew, and the incomprehensible mind/language of the apparent bioweapon the Engineers have built) and shows how understanding a language is not necessarily understanding the mind of another. In the image shown above, the last Engineer reacts to hearing his own language from creatures he doesn’t recognize with fear and rage. The act of ripping the android to pieces and killing the human he is aiding does not result from offense but misunderstanding and fear, much as humans often react to the alien 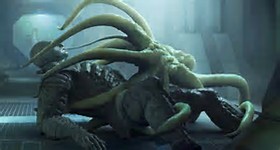 Later, the Engineer, who is attempting to kill all the humans, and to send a bioweapon to Earth, is attacked by one of his own creations, who has augmented its DNA with the DNA of one of the spacefarers, in essence her baby. All of this is mysterious to the viewers (which may be why the movie was not satisfying to many) but it makes sense that a truly alien environment and evolution would not be commensurate with our own.

As Clarke notes, “the alienation of focalization is an important service of science fiction narrative as an active mode of social self-reference” (39). The discomfort of this posthumanist narrative is that humans are the other, feared and hated by the AI, David, who sees himself as a superior creation, and, in a Frankenstein turn, by our creators, who find us abhorrent.

Wolfe, Cary. What is Posthumanism? Minneapolis: U of Minnesota P, 2010.

Hi Maria!
Exciting choices and very pertinent for Herbrecther and Callus analytical method. What particularly caught me was how the human in Prometheus is situated as the other. Is the focalization at one of the other species or at the human? And how are the species related to each other? Are they fighting or is there any sign on a wish of peaceful coexistence or aspects of care involved?

Author
Maria O'Connell
Thanks for the comment! The humans on the ship are hoping for a relationship with the Engineers and the android is hoping to finally be recognized and valued for his intelligence and understanding. The Engineers are apparently our ancestors, who seeded the Earth with their DNA, but the relationship to the bioweapon creature is unclear, both why they built it and why it killed most of them. However, at the moments of contact, between human a creature or human and the Engineer, communication completely breaks down, resulting in a great deal of mayhem and death. The focalization is interesting, in… Read more »
Vote Up0Vote Down  Reply

Editor
Johannes Poulsen
I must agree with Katrine that this is an excellent choice of film for this topic, and I think the film really complicates the “posthumanist reading” in a number of ways. It is also a good example of how the most interesting works of popular culture aren’t always the ones we think of as the “best” in terms of art criticism. The moment where the Engineer reacts to David speaking its language is very interesting. Is the engineer having his own “posthuman” moment, where the ontological purity of his own position is questioned? While the film does raise a ton… Read more »
Vote Up0Vote Down  Reply

Author
Maria O'Connell
Thanks, Johannes. You raise some good questions. On reflection, it does seem that there are several layers of othering: Shaw is religious and hoping to meet angels (the Engineers have some of the traits associated with angels) and isolated from other scientists, David is an android who considers himself superior to humans and is isolated by his jealousy and by his physical difference. He is beautiful, but there is something odd and inhuman about his movements (Fassbender does a great job playing him) and he puts the humans off. The response to the Engineers and the monsters they have created… Read more »
Vote Up0Vote Down  Reply

Hi Kristian. Thank you. It is an odd thing in the movie and in real life. Maybe we don’t want to be confronted with our own imperfection?

Editor
Eva Krarup
Hi, it’s great that you point to the “Frankenstein heritage” in Prometheus, really interesting read and it is always nice to see how an old classic like Shelley’s keep posing relevant questions that are developed further in contemporary visions of the posthuman. Just a small remark regarding the theme of perfection because I think that discussion is very interesting as well. Perfection seems to be one of these things that play a very ambiguous role within this field, doesn’t it? On the one hand, the imaginaries about the posthuman are (to a wide extent) driven by the desire for perfection… Read more »
Vote Up0Vote Down  Reply

Thanks for your questions! It may be included in the concept of care. Part of the problem, though, is how to express that care? Do we medicate those with brain disorders or celebrate difference (even if it is torture and dangerous for them)? How do we deal with those who have genetic disorders? Are we caring when we shame the overweight? Or just uncomfortable? We haven’t answered the questions for human care, and the posthuman seems to be revealing that ugly fact.