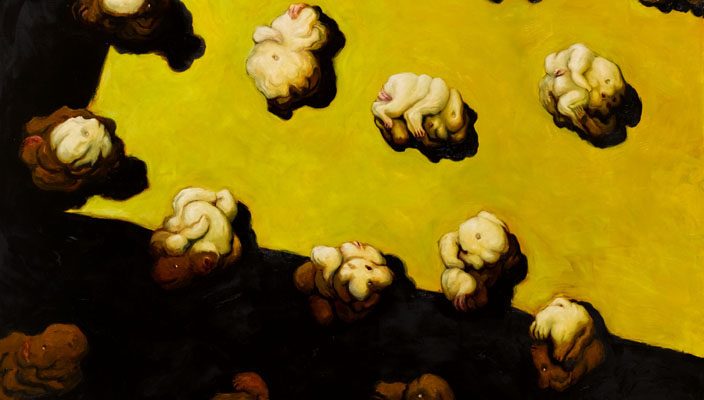 In an effort to try and attach a small detour to the general posthuman road on which we have travelled far I found an essay called ”Hybridity is the new metamorphosis” from 2012 by the english writer and professor Harvey L. Hix. In his text Hix explains how the notion of transformation in context with becoming ”the other” has changed from a focus on metamorphosis to the current discourse of hybridity. As Hix writes;

Where metamorphosis mainly focuses on human subject becoming other in form but still remaining distinctively humanistic in conscious (As for instance in the case of Zeus changing forms and still remaining godly in mind), hybridity is neither the narrative of the exceptional human self or “the other” but indeed the creation of the third fluent posthuman entity. What is especially notable in regards to Hix’s contribution is the description of how this change of discourse has affected the posthuman’s political potential.
The hybridity thought provokes action from the subject, as the conditions are no longer outside the self or easily displaced in “the other” but is now in the core of vulnerability in all hybrid entities including us.

“In a world of hybridity, in contrast, nothing saves me from myself; instead of the external world threatening to overwhelm me, I (we, humanity) threaten to overwhelm it. Now that we are mechanical/digital cyborgs, the events to forestall are those (such as oil spills) that follow from our condition, but are ultimately not only destructive of other things but also self-destructive.” (His: “Hybridity is the new metamorphosis”, p. 278)

What may at first seem like a banal side note in regards to the overall progress in the field of posthumanism is actually a very valid nuance in an important move away from the hegemonic transformation of self-to-other-and-back and towards a ”meshy” (A grateful tip of the hat to Morton) hybrid merger of selves and entities.

3 Comments on "Hybridity is the new metamorphosis"

Thank you for your post! It got me thinking of a book I read recently that handles a similiar subject area as your post here, namely Bruce Clarke’s “Posthuman Metamorphosis: Narrative and Systems”, in which Clarke through a systems theoretical approach analyses narratives centered on metamorphosis in modern and pre-modern times, and what those narratives can tell us of the posthuman condition. I’ll provide a link to Stanford Press so you can read the blurb yourself:)

Hi Sofie, I like that you bring up Kvium, I haven’t thought of him in the context of the posthuman before, but when you mention him here I wonder why. Do you see paintings like Short Stories 72, As Domestic as Milk and Oil I + II, Future Jam and his paintings from 2000 as dystopic thematizations of the posthuman?

Author
Sofie Reimer-Walsted
Hi Eva! Thank you for your interesting comment. I think it is somewhat limiting to label his works as purely dystopic in the “classical” sense of the theme. In my opinion Kvium comments on our anthropocentric humanistic vision of the deform and “dystopic”. Who are we to judge the entities represented in the surreal landscapes on the basis of our own falsified exceptionalism? With the “deform” entities meeting our gaze (as in for example “As Domestic as Milk and Oil I”) and therefore challenging our view of them as the horrific object/other we are forced to rethink what it means… Read more »
Vote Up1Vote Down  Reply