In the realm of fiction, there are many examples of a divided humanity and that point out to how fiction can open a mode of awareness about the way we live and the way we could for the better or worse. I like the way Istvan Csicsery-Ronay defines science fiction in particular:

SF, then, is not a genre of literary entertainment only, but a mode of awareness, a complex hesitation about the relationship between imaginary conceptions and historical reality unfolding into the future. SF orients itself within a conception of history that holds that science and technology actively participate in the creation of reality, and thus “implant” human uncertainty into the nonhuman world. (CSICSERY-RONAY, 1991, p.1)

I specially like this part: “implant” human uncertainty into the nonhuman world”. This relation is posed on many works of fiction we read, not only in the science fiction genre. One of my favorite examples is the animation Akira (1988) by Otomo Katsuhiro. Akira depicts a dystopian version of Tokyo in the year 2019. The plot focuses on teenage biker Tetsuo Shima and his psychic powers, and the leader of his biker gang, Shotaro Kaneda. Tetsuo possesses psychic abilities similar to Akira, who caused Tokyo’s destruction. Several parties, including Kaneda, resistance terrorist Kei, Colonel Shikishima and a group of kids with psychic abilities  attempt to prevent Tetsuo from releasing the imprisoned psychic Akira. The result is that Tetsuo is incorporated by the nonhuman other. 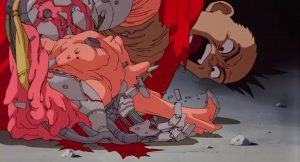 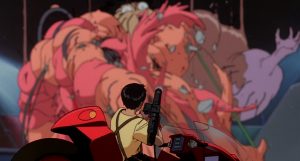 In Akira we have a good aesthetic example of how science and technology can interfere with the way humans are, and how can we become in the future. To predict such a future, we have to think about our current present. I think that the fiction genre with its vast modalities allow us to pose questions with a larger set of time. In Akira there are many attempts to demonstrate this: governmental intervention in creating and develop psychic powers, violence, terrorism, war, a decadent way of life, posed in the teenagers that are caught up in the middle of this. In the underground of Neo-Tokyo lies Akira, a power that has awaken and has put to sleep by the government because it was out of control. Nobody knew that, so the past also is entrapped in this articulation. The human is caught up with the nonhuman to tell a story about how we organize those definitions.

Editor
Johannes Poulsen
Very strong imagery in the pictures you included! Mutating flesh, machinic prostheses and the ever-present wide-open eyes and mouth staring at the posthuman in all its gory glory. Two questions: You talk about predicting our future(s) through thinking about our present. How is Akira shaped by the present in which it was published (the 80’s), and do you think it functioned primarily as an investigation of possible futures or as some sort of future fantasy? I think the relationship between a) the way we use the future space in fiction to think about our own future and b) the way… Read more »
Vote Up0Vote Down  Reply

Hi Ângela, I’m very excited by this post and the quote that you’ve chosen to highlight; I advocate much for its relevance. I have just one question for now: In the examination of sci-fi’s such as Akira, how is it possible to distinquish between speculating, expressive conceptions of plausible futures and the sci-fi fantasies where the intention of speculating and expressing implications of e.g. super-humans like the former is not there? Or does such a distinction even need to be drawn, which would mean that all science fiction unveils issues and challenges of the future of humanity?