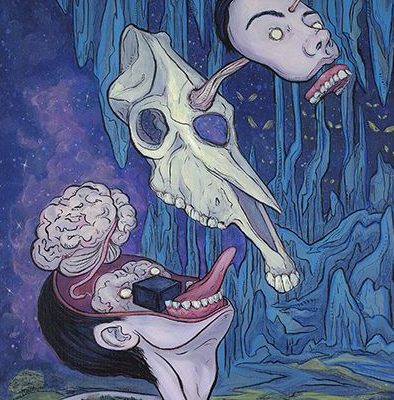 “The further we traveled in the darkness, the more I began to feel estranged from my body. I couldn’t see it, and after a while, you start to think the body is nothing but a hypothetical construct.”

Haruki Murakami’s novel “Hard-boiled Wonderland & the End of the World” presents an intriguing view on the nature of consciousness.

Although the book is inconclusive and rather open to interpretation, it seems to reflect an understanding of mind and consciousness that both illustrates the paradigm of idealism and materialism, as it is explained in the lecture.

As Alexander Wilson says: “Living in a world of illusion echoes western philosophies mistrust of the senses”, and the fact that the story is composed of two parallel narratives or realities, where one of them is presented as the real world (even though the other world seems just as real) makes it similar to “The Matrix” in many aspects. One of the ways that “Hard-boiled Wonderland & the End of the World” differs, is the fact that the “illusory” world is the narrators own subconsciousness and the world he eventually ends up living in exclusively, which ties up with the proposition of idealism that “matter derives from mind”. Without giving any answers, it raises questions of identity, mind, reality and consciousness that touches upon the different philosophies mentioned in the lecture.
As the paradigm of idealism is illustrated in the narrative called “The End Of The World”, that is a mysterious and dream-like reality created in the subconsciousness of the narrator in Hard-boiled Wonderland, the materialist paradigm comes through in the “Hard-boiled Wonderland” narrative. The fact that the narrator in this story, the Calcutec, is some kind of human data encryptor, who uses his subconsciousness to scramble data, implies that mind must be made from matter, and that it can be reduced to mechanistic processes that somehow can be used to encrypt data.
Even though both materialist and idealist paradigms are represented in the novel, in the end they merge together, and in that sense seem to implie the same conclusion posed in the lecture that: “(with the prospect of A.I) idealism creeps up from materialism and the two opposing doctrines become indistinguishable”.

1 Comment on "Hard-Boiled Wonderland & The End Of The World"