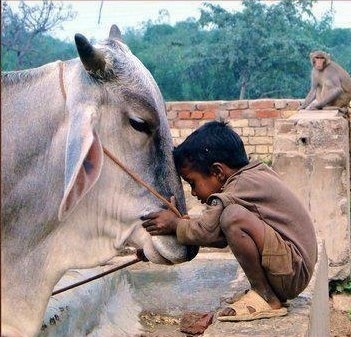 I would propose that the very fact that humans a able to empathize is proves that humans are not reducible to their physical attributes. Emotion might be shown on a CT scan of the brain, but this would not enable us to comprehend or grasp the emotion. Empathizing with another creature will however allow us to at least partially grasp the emotion of the creature.

Nagel suggest that this is dependent of the proximity in which you find yourself to the creature.(Nagel, 1974, p.442)

However i will argue that it is possible to empathize with creatures alien to your emotional life. Even though I might not posses the subjective resources of an ape, and therefore as Nagel suggest not be able to fully comprehend how it is like to be an ape,(ibid.) I might fell sad if the apes baby was killed.

In the film above Dr. Grandin clearly tries to put herself in the shoe of the cattle, examining the world from their point of view, empathizing with them. Given her research and knowledge she might find herself in a closer proximity to the cattle, allowing her to empathize with them, as Nagel suggest (Nagel, 1974, p. 442). However it might also be a possibility that more credit has to be attributed to importance of experience and interaction which allows us to connect emotionally to other beings, instead of centering the field of study on the human and the physical attributes of the human. Further these interaction and experiences might need to include other creatures than the human.

Editor
Eva Krarup
Hi Kim, thank you for your contribution. It’s interesting that in the TED talk mentioned in the video above (link here: https://www.ted.com/talks/temple_grandin_the_world_needs_all_kinds_of_minds?language=da#t-368315), Dr. Grandin compares her way of thinking to a computer system, she explains her visual thinking by comparing her mind to Google Images and later on she says that this visual thinking has been crucial to her cattle project because it allowed her to test run systems like in “a virtual reality computer system”. This could, I guess, point to new technologies and virtual reality as something that can allow people whose minds do not function like Dr.… Read more »
Vote Up1Vote Down  Reply