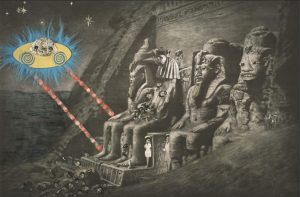 I wanted to include the example below as it simultaneously troubles and reaffirms ‘unity’ through the politics of representation and difference.

Abu Simbel 2005 by the artist Ellen Gallagher is a reworked version of a print that hung in Sigmund Freud’s library depicting the ancient Egyptian site of the Temple of Ramesses II. Gallagher uses elements of collage from post-war magazines as well as Sun Ra’s 1972 Afrofuturist (1) science fiction film Space is the Place in which Sun Ra has been sent to earth to rescue downtrodden African Americans and take them back to his astral utopia. Gallagher combines historic and futuristic elements to create a newly imagined mythical universe that is both speculative and critical. The artist describes the work as “a tricked-out, multi-directional flow from Freud to ancient Egypt to Sun Ra to George Clinton.” (2)

Editor
Johannes Poulsen
This is very interesting, and I wish I was more familiar with the topic. Is afrofuturism something you have investigated outside of this course? A couple of recommendations for reading would be great. It does cause me to think of a topic in my own studies of the posthuman in popular culture, which is the idea of the posthuman as salvation or emancipation. Throughout the history of popular culture (and especially comics and science fiction films), there has been a recurrent messianic theme of the mutant, the alien, the posthuman savior emerging to overthrow power and bring freedom to the… Read more »
Vote Up0Vote Down  Reply