Now that we’ve come to the last lesson, I’d like first to register my gratitude to the instructors and organizers of this great course. It has been an intellectual feast, and a refuge from political ugliness and thoughtlessness that unfolded this fall in the U.S.A.

Wolfe’s article in Signs of Life strives to articulate an ethics for all living beings by moving through several theoretical positions. At the outset, Wolfe points out that contemporary bioethics does little more than providing (legalistic) guidelines for policies in healthcare and medicine, i.e., serving bio-political regimes that leave species hierarchy intact. It has largely failed to incorporate the latest ethological findings to address the ethical implications of animal experimentation in biomedical labs.

Wolfe goes on to show that some of the current theorizing (including by Paola Cavalieri, Tom Regan, and Peter Singer) of the injustice of animal experimentation is inadequate insofar as it smuggles in ethnocentrism and expediency through the backdoor. The only true exception, it seems, is Jacques Derrida, who somehow manages to transcend the aporia of negating species hierarchy without obliterating difference. Before Derrida, Cora Diamond comes close in her insistence that the biological difference between human and non-human animals bears no necessary relationship to the ethical import attributed to it “by generations of human beings, in their practice, their art, their literature, their religion” (quoted 102). Merely invoking interests, rights, or welfare cannot undo this baggage. 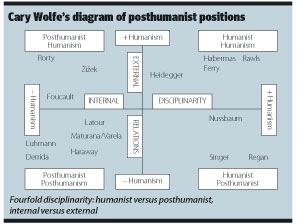 In the last part of the article, Wolfe’s line of argument becomes somewhat misty. On the one hand, he tells us that Derrida extends Diamond’s ethics of compassion on the basis of the shared mortality and vulnerability of all living things. In other words, justice must be founded on our shared status as “moral patients,” rather than on how we as “moral agents” treat passive others (which Braidotti calls “compensatory humanism”). On the other hand, Wolfe connects Derrida to Diana Fuss’s elaboration of Nietzsche’s “human, all too human”: “If humanness constitutes itself through its own superfluity, then to be human is already to be, in some profound sense, nonhuman” (quoted 109). He writes: “For Derrida, of course, that nonhuman alterity at the very core of the human is language itself” (109).

I find the second line of argument baffling because Wolfe seems to be reinscribing the moral relevance of empirical, biological difference—here we are asked to place human language on a par with “animal languages.” I fail to see how such a commensuration of languages could do the trick of dispelling “the pernicious ethnocentrism” in Diamond’s relational view of ethics—especially if one is convinced that human language is unique and superior to all other “forms of marking” (110).

My final thought: Posthumanism is a difficult subject, but it does not have to be mired in hair-splitting, obscurantist scholarship. Stefan Herbrechter & Ivan Callus’s “What Is a Posthumanist Reading?” is a model of complexity in clarity.

3 Comments on "Bioethics and the Posthumanist Imperative"

Cary’s prose is megadense. I much prefer Haraway. 😂

Member
Leon Human
Hi Haiyan. Thanks for this interesting reflection on Wolfe. I find him very suggestive, although a bit cavalier in his dismissal of very precise and detailed work in the field of analytical animal ethics (albeit ensconced in an ideological milieu we can all easily condemn). I have my doubts about Derrida as the posthumanist’s posthuman, and the political economy of his ‘eating well’ is dubious. Also, perhaps the stress on vulnerability and mortality is not that innocent, given that there is a big difference between living human vulnerability day to day and living animal vulnerability, given our props and techics,… Read more »
Vote Up0Vote Down  Reply

Thank you, Leon, for this cogent comment. You are absolute right in calling out the cavalier invocation of shared vulnerability that obscures the relations of victimization between humans and animals. As for whether the proposed abolition of trade agreements would spare more animal lives, there may be something to that. For one thing, the US export of livestock products might drop. But given the overdetermined nature of global capitalism, it is hard to belief that animals could actually emerge as beneficiaries. In any case, thank you again for your unfailingly enlightening remarks!