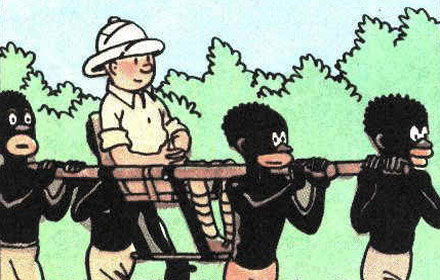 In the Belgian cartoonist Hergés Tintin in the Congo (1931) Tintin is a reporter sent to the Belgian colony Congo to report on events in the country. A critical postcolonial reading of the comic reveals a multitude of colonial discourses which creates a clear distinction between the natives and the western subject, a hierarchically dichotomy where the native is more an object than a human subject. This can be read as a proof of how the posthuman always have been with us, in the construction of the “other.”
The above comprehension of the natives and the corresponding way to treat them, aroused the first early signs of a human rights organisation back in Europe and the question of care. As Hannah Arendt later wrote: “the fact that people must be actively judged human to enjoy the benefits associated with such title.” The quote expresses how humanism is a dividing category, in the current situation excluding the native but also the in-, non- and posthuman when read with posthumanistic eyes.
The critical posthuman reading in Herbrecter and Calus optics, opens in this way up, how humanism is inherent exclusionary an must be deconstructed and reconstructed in a expanded form with space to diversity. Its a question about who we care for, as they write in the text What is i posthumanist reading?: “it might emerge that posthumanism is actually not only quite a caring paradigm after all but also a paradigm for care.” (109)

4 Comments on "An exclusionary humanity"

I think you have a point in the otherness having always been there, could maybe be seen in connection with Herbrechters description of the inhuman(where he reference to Nietzsche) in Posthumanism: A critical analysis, however in order to go through with this argument the natives would then be inhuman? Right? Because with posthumans there is a actual distinction the posthuman having other capabilities than the human?

Author
Katrine Winther Kristensen
Hi Kim, I certainly get your point, but what was my intention here, was not to discover how we see the posthuman, but to turn the gaze around and examine how we define the humankind as species. Before it’s possible to make an actual distinction between the posthuman and the human, the human conditions must be determined. In this way I see the critical posthuman reading as a practice which can map discourses that constructs both our conception of the other but also of our self. My example was an attempt to show how this tendency to define and categorize… Read more »
Vote Up0Vote Down  Reply

Okay, so if we were always posthuman in this sense, could you do a posthumanist reading of Tintin in the Congo in the same way H and C read the science fiction films? Does the colonial discourse within which Herge writes allow for “posthuman moments” for us to interpret, where the ontological borders between human (Western) and Other (indigenous populations) are threatened? Or are the people Tintin meets “always-already” nonhuman? That sounds like an interesting exercise.

I dont see any subversion of Tintin in the comic. But here again is the human focalization and the discourse already defined – not only in the comic but by the Western senders of the comic.
Tintin is not moved or in doubt of his position neither are the natives. In that way we are never forced to take a non-human perspective.
But I still believe that the borders between human and other are unblocked by a critical posthuman reading as and evaluation on the conceptions the comic accepts and express to protect the projected distinction.