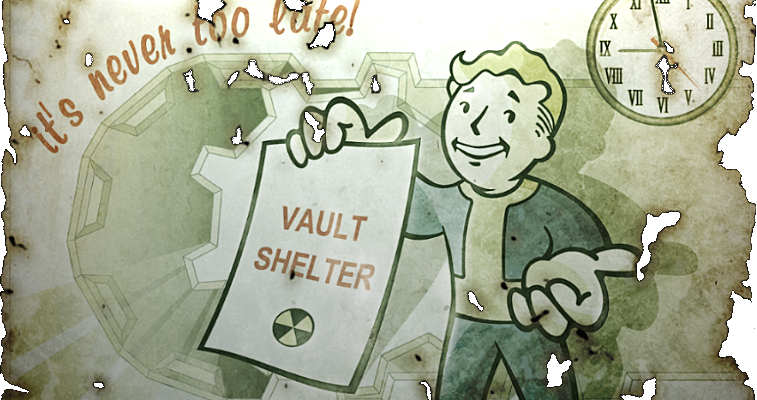 What if annihilation is not the end of humanity, but yet another chapter in the history of mankind? Such a question is posed in the Fallout series, which consists of post-apocalyptic video games set in the 22nd or 23rd century. Rather than following recent history, the setting is based on an deviating timeline after WWII. Years of conflict between the United States and China has resulted in a global nuclear war which has turned the world into a wasteland.

With all societal structures gone, survivors engage in an ongoing war for survival and dominance in the wasteland. But the wasteland is not only inhabited by humans:  Raging ghouls, irradiated animals and even super mutants – genetically modified humans – are among the obstacles the player must constantly overcome in his adventures.

The last remaining examples of civilized societies are in the underground vaults. Provided by the Vault-Tec company before the nuclear war, the shelters were promoted as safe havens, but were actually elaborate lab-environments for carrying out inhumane experiments on the residents.

Everything is the result of the late civilization where the divided humanity had neglected one another for far too long. But in the wasteland, the power balance has shifted. Now, everyone is vowing to take back what was rightfully theirs.

5 Comments on "After the War"

Member
Mads Søndergaard
Have to love the Fallout universe – a great example of the future retro genre – and a long time (almost die-hard) fan myself, and I agree fully with your summary of the plotline. 🙂 One thing I’ve always wondered about, is whether the game is set in an “accidental” scenario, or a deliberate one. Or rather, whether the Great War was merely the culmination of the energy crisis in the setting, or whether it was instrumentalized by Vault-Tec to some extent, or merely capitalized on by them, in order to create a sociological analogue to eugenics; not only were… Read more »
Vote Up0Vote Down  Reply

Editor
Johannes Poulsen
Can’t wait to hear your response to Mads’ questions 🙂 (Full disclosure: The Fallout Series is also very dear to me and I probably can’t help but have a bit of fan bias here). I would like to challenge you to dig a little deeper here. You are absolutely right in pointing out that Fallout , and we might add the entire post-apocalyptic genre, is all about humanity lingering on after the end, not getting wiped out but getting entangled with all it’s successors and the aftermath of some sort of more or less Anthropocene catastrophe. That being said, can… Read more »
Vote Up1Vote Down  Reply

Author
Simone Boye Mouritsen
Thank you for your valuable insights Mads and Johannes! My summary was somewhat superficial so I am happy to elaborate on it. First of all I would say that posthumanity is presented as deliberate. Not in the sense that neither of the nuclear powers necessarily were interested in total annihilation, but in the way that the Great War and the aftermath of it is an inevitable fate. Of course this is also based on the limited knowledge the player has of life before the Great War, so it is hard to say which attempts were made to avoid the nuclear… Read more »
Vote Up1Vote Down  Reply

*Spoiler alert*
(I assume both of you have completed Fallout 4. 🙂 )

Food for thought regarding the synths: Looking back on my playthrough of Fallout 4, I don’t recall feeling any remorse when I destroyed The Institute and deliberately murdered my son.(Funny how gamers often refer to the controlled character as themselves) On the other hand, I was absolutely thrilled to be reunited with the young synth Shaun back in the settlement. This made me wonder: How does the virtual environment justify our unethical and outrageous actions?

Member
Mads Søndergaard
I completely (and somewhat heart-broken..ly) agree that the series has, with the latest installment – and I feel starting with 3 – deteriorated into commercialism (New Vegas not included in that assessment). In 3, the focus was on showing off the First Person camera, and in 4, it felt more like an attempt at jumping on the sandbox-band wagon, than an actual installment – even the lack of any interesting Vaults to explore was a painful realization; at best they were mundane and uninteresting. From a purely personal standpoint, I do consider New Vegas to be the superior of the… Read more »
Vote Up0Vote Down  Reply