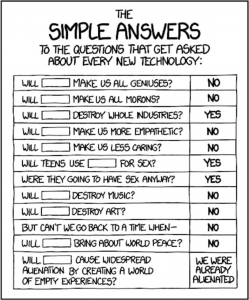 Hayler’s main project springs from something as mundane as the iPad. In his book he addresses the language we use to talk about that kind of technology. He also examines how it affects our thought and actions in the real world.

He argues against the notion that a printed book is more “natural” than an e-book. This argument is based on darwinistic idea that adapting to new technologies, is central to human-beings. He calls it a “coevolution” with tools. (Hayler, p. 4)

By moving the site of knowledge from the human brain to a cognising system that includes the body and artefacts in the world, we can start to understand human knowing as a subset of a more fundamental, posthuman mechanism for acquiring and deploying data. (Hayler, 5-6)

If, he says, technology can be considered as having evolved and can be spoken of in evolutionary terms, then there is reason to believe that a posthuman conception of knowledge, that is nonhuman knowers, is within reach. This means that when we interact with an iPad, it contributes comparably to the one, using it. Then it would seem that Hayler’s main argument is that we should consider technology within a darwinistic framework in order to better understand how it evolves alongside us.

Dear Mads, thank you for sharing this article. I liked the general idea of it, because it shows the phenomenon of dematerialization and disembodiment of our entire environment – not only that the people, but also the everyday objects are “migrating” digitally. Especially in the field of textual, and overall cultural, production and reception, that ask for a new type of both writer and reader, developing this way the literature and art! Espen Aarseth spoke about ergodic literature and cybertext in 1997, almost anticipating the progress we see nowadays.