A Theory of Learning in A Mobile Age – Sharples

In this article Mike Sharples(2006) describes how one might conceive a theory of learning in a mobile age.

What i will focus on here is however just the first part of the text, where Sharples(2006) gives a resume of Plasks conversational theory which Laurillard builds on. (Sharples, 2006, p. 1-8)

Now what is special about Plasks conversational theory is that it doesn’t discriminate between human and technology, in his framework technology can thus take the place of the teacher or a fellow learner in a conversational framework. (Sharples, 2006, pp. 5-6)

Below follows the conversational framework, adapted from Laurillard, for further information on its machanics read pp.1-8. 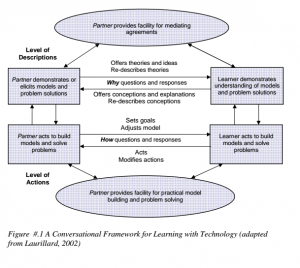 Now Sharples concludes that the ability to function like teacher or learner in this way is quite limited for the informational technology, because the machine i:

So even though Sharples(2006) concludes the computer can’t function in a way in which it can replace a teacher or learning partner completely, a theory for accommodating computers on equal terms do actually exist. This is interesting to the posthuman discourse in regards to the renewed ontological status of the machine, ie. machine as subject.(Herbrechter, 2013,p.106) Further this is interesting in a posthuman perspective, because the limitation here is more in the ways of what we are able to make the computer do, not in the framework of learning in which it can be included.  In this regard present years Horizon report mentions Affective Computing as a trend on the rise, though still nascent, universities are making progress on this technology. (Johnson et.al., 2016) This coupled with Learner Analytics and Adaptive Learning(Johnson et.al., 2016), also trending, might when fully developed attribute to change the conclusions Sharples(2006) draw about the lacking abilities of the computer to take place in the conversational framework.

This is as mind-blowing as the AlphaGo and computer creativity discussed by Sebastian in the last assignment and Alexander’s following comment.