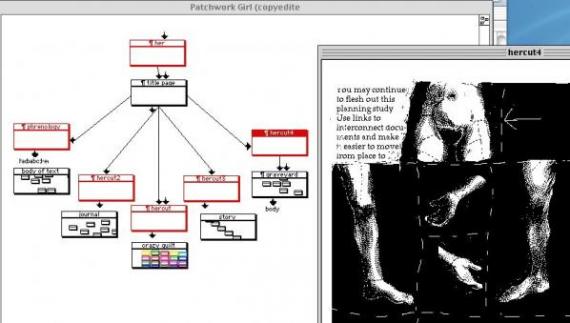 I find it difficult to define the posthuman. Dominic Pettmann argues that “humanity” itself is a mistake and names it, borrowing Benedict Anderson, the greatest imagined community of all. The posthuman goes beyond or further than our traditional concept of the human, a flexible geometry of what we see as human, animal, and machine. No posthuman is the same: instead, the posthuman is anti-essentialist and situated in its own time and place (oversimplifying Donna Haraway’s famous manifesto). For this alone, it is not easy to define/give a definition of an “identity” that is indefinable by its very nature. in One work of art that exemplifies this flexible triangle of human-animal-machine is writer and artist Shelley Jackson’s Patchwork Girl. In Patchwork Girl, Jackson explores the posthuman by means of the medium hypertext.

Patchwork Girl tells the story of the second “monster” in Mary Shelley’s Frankenstein, a woman ‘as horrible and deformed’ as the original. Patchwork Girl reads like a collage. In total, the text consists of 462 hyperlinks and 323 individual lexia, varying from images to single sentences and longer texts (please see the image). Together, these lexias compose a network of separate blocks of text. It is a hypertext: meaning a story written in a special programme using hyperlinks to connect and create a narrative. Together, these hyperlinks create a multilinear narrative without a “proper” beginning or ending.

Below are two aspects of the novel that I believe count as very obvious markers of the posthuman (in literature). Patchwork Girl is written as having three authors: Mary/Shelly & Herself, or Mary Shelley, Shelley Jackson, and the monster herself. The reader is the final author, who decides where the narrative begins and ends. Performing the anti-essentialist posthuman identity, the patchwork girl tells the reader: ‘My birth takes place more than once.’

The hypertext has often been analysed and interpreterd as performing the female self: this is partly due to the text’s multiple female authors and the many allusions to sewing, a traditionally female trade. The monster, however, is made up of not only women, but her body is also made from men and animals – and more. The hypertext also contains a part written by Shelley Jackson’s Mary Shelley, in which the fictional authors writers: ‘I collected bones from charnel houses, paragraphs from Heart of Darkness, and disturbed, with profane fingers, the tremendous secrets of the human frame [and] an old patchwork quilt.’

All in all, I can only recommend everybody to read this wonderful hypertext! Because I currently do not have my own copy with me, I’m afraid I don’t have screenshots of the actual part I briefly describe above – my apologies!

Thank you for introducing us to this piece. Hypertext as a medium is also an interesting object of analysis, since it supposedly bestows the machine with the associate abilities of the human brain. I find it intriguing how Patchwork Girl comments on this matter and would like to look further into it.

Member
David Magill
I have taught Patchwork Girl next to Frankenstein and I appreciate your bringing it here as a means of showing how identity and technology can interrelate. I find the idea of “reading” here very interesting as a practice that must blur boundaries between the text and the reader, the subject and the object. Jackson’s text forces us into active interaction with the machine to produce the text we read and interpret, but our actions allow the program to interpret our preferences and construct our narrative. The “play” in re-reading is never getting the same text twice, and exploring to understand… Read more »
Vote Up0Vote Down  Reply