In the comic book Watchmen a character is asked, what he feels about the death of a close friend. The character answers that he does not feel any different, because the amount of atoms in the dead friend is the same as when he was alive. This does not sound like a very human response to the subject of death, and the speaker is in fact not really a human. He is Dr. Manhattan; the outcome of a nuclear accident. He can manipulate the very matter around him, he can be everywhere at once and he cannot die. Basically he is like af god and in Watchmen he is initially part of a vigilante group trying to stop evil in the world. But as the story unfolds, it centres on among other things Dr. Manhattans withdrawal from human society and his reasons for doing do. This becomes a sort of philosophical enquiry into what it means to be human and Dr. Manhattan becomes the case study of man, if man had absolutely no physical limits. The comic book is kind of open-ended about this, but it is definitely implied that Dr. Manhattan loses interest in human beings, because he is different and superior. He feels less and less connected to the human world and hence cares less and less about us. The posthuman in this respect is characterised by otherness; an aspect that both Jacob Wamberg points to in his video lesson and Stefan Herbrechter writes about in his book Posthumanism: A Critical Analysis. 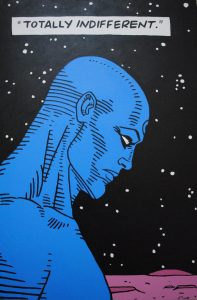 2 Comments on "Why should the superman care?"

Member
Lara Eva Sochor
Dr. Manhattan is an interesting example indeed in this context. Nonetheless, I always thought of him more as a transhuman being, who as a result of his being no longer ‘human’ subsequently lost interest for a species to whose petty problems he couldn’r relate to anymore. I always felt that Dr. Manhattan was forced into his role as a Posthuman just as he was forced to view humanity with a sense of the world that made anthropocentrism probably seem absurd and narrow-minded. Please feel free to strongly disagree, while I am familiar with Watchmen I am by no means an… Read more »
Vote Up0Vote Down  Reply

Having only seen the film, that will be the basis for my participation in this discussion. Dr. Manhattan is an interesting character to look into with regard to posthumanism. His disconnection with humans and the issues of humanity, due to his almightiness, gives an interesting perspective on these issues. It gives the sense of their insignificance in comparison with greater phenomena, and it can invite to a reflection of our understanding of our position in the universe.