”The challenge is to show you that she is a robot, and then see if you still feel she has consciousness”, Nathan says.

The movie Ex Machina tells the story about an experiment with AI. Nathan has programmed a humanoid robot. The robot, Ava, has surpassed the Turing Test, but Nathan wants to test if Ava can convince a human, who knows that she is a robot, that she is capable of thought and consciousness. Therefore Caleb has meeting sessions with Ava, where he interacts with her and judges her consciousness.

Obviously the movie tells a story about the development of AI and robotics and it has a sci-fi feeling. But between the lines, Ex Machina asks philosophical questions about the nature of AI, compares the human brain to the mechanic and challenges the common beliefs of existence – in a posthuman context.

”In the posthuman, there are no essential differences or absolute demarcations between bodily existence and computer simulation, cybernetic mechanism and biological organism, robot teleology and human goals.” (Herbrechter, s. 42)

In the movie Caleb and Ava keeps getting closer to each other. When Caleb sees Ava showing emotions, he starts doubting that he is not an AI rather than doubting her. He probably thought his emotions were proof he was not AI, but when knowing Ava is and seeing her showing emotions, he doubts himself.

So, as the movie asks, if we cannot distinct robots from humans by our emotional capabilities – then how can we? Or can we even? 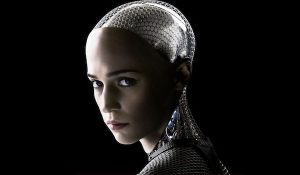 (By the way. I tried to leave out any spoilers. Watch this movie if you haven’t! 🙂 )

3 Comments on "What makes us human?"

Member
Claudia Bubke
Hi Sine, your example is very interesting, especially regarding my own post on Transcendence. Both films seem to deal with the human consciousness differently. While Ex Machina attempts to distinguish the human from the mechanical brain, Transcendence goes beyond that distinction and directly unites them via uploading a man’s brain into an AI computer. Still, they seem to dissolve the “differences or absolute demarcations between bodily existence and computer simulation (…) robot teleology and human goals”, as you fittingly quoted. Or, to make them redundant after all? Would you say that ExMachina offers a positive or negative perspective on the… Read more »
Vote Up0Vote Down  Reply

Member
Cecilie Hornstrup Nemeth
First off, the movie is a beautiful masterpiece in all it’s rights, very visual and very well executed. Thank you for the introduction to this. Now, the question you pose, and that the movie poses, “if we cannot distinct robots from humans by our emotional capabilities – then how can we? Or can we even?” reminded me of Battlestar Galactica, and the cylon/human war raged in the show. I will not ruin the experience for you, if you have not watched it, but the Battlestar Galactica poses the same question, and more. “Does a face make one human?”. In the… Read more »
Vote Up0Vote Down  Reply

Member
Ângela Longo
Hello Sine, when I saw the movie it was very thrilling because it has lots of interesting insights. “I propose to consider the question, “Can machines think? […] Are there imaginable digital computers which would do well in the imitation game?” (TURING, 1950, p.433). When they invert the semiotic markers between the actual body and the represented one through an electronic environment there are blurs between them. The movie in my opinion goes further on this, because it insert’s the doubt of the soul to the person who is analyzing (Caleb). Are our so called human emotions that unique? How… Read more »
Vote Up0Vote Down  Reply