How we conceive what it’s formally normal and acceptable and what is deformed and bizarre? And what about our face? One work that I find interesting is Emoter (2000) by the artist Tim Hawkinson. Using the image of his own face, Tim developed a motion expression work that recreates lines and emotions in his face. 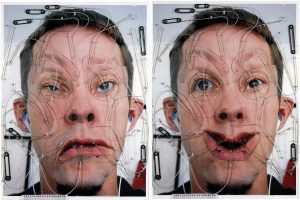 “I use my image or my body in a lot of the work as a jumping-off point, but usually the end result is so abstracted that I don’t really feel so identified with it any longer,” says the artist. “It’s not about my identity, but it’s about our identity and our experiences within our bodies and our body’s relationship to the external world.” (Tim Hawkinson)

The face is one of the first places we look at people, it is from there that emotions are passed and perceived. One of the ground-breaking works that talks about this is the Uncanny Valley by roboticist Masahiro Mori. In his work, he tell us that increasing realism does not always imply increased acceptance on the part of the viewer and that this concept could be applied beyond the discursive of robotics. What I find fascinating is that it exists some eerie feeling in perfection, as in imperfection.  In the work Eletronic Ant by Philip K. Dick, Mr. Pole discovers that he is an eletronic ant, who has been assembled and owned by the true owners of his company Tri-plan. His discovers this after an accident when he loses his hand: the uncanny feeling is posed on himself.

Programed. In me somewhere, he thought, there is a matrix fitted in place, a grid screen that cuts me off from certain thoughts, certain actions. And forces me into others. I am not free. I never was, but now I know it; that makes it different. (DICK, p.103)

This passage poses a great departure to think enhancement and normality: there are things in us that we don’t have control, situations that are put before us. Different inequalities that are faced by many people striking to survive. The text about enhancing equality strike me as a way of thinking about the ways we can achieve equality by perceiving that we are all born unequal. Equality not as a description of the world or how things are, but as a means of how people should be treated.  We have to think about the declaration of Mr. Pole: “I am not free. I never was, but now I know it; that makes it different”. Knowing that there are constraints in multiple levels in our society liberates us to think and engage in a different way.

If equality is an ideal worth achieving, I strongly suspect we will have to change the dispositions of people to achieve it. (SAVULESCU, p.202)