Edward Bulwer-Lytton’s novel The Coming Race refers directly to the western representations of the unknown reproduced as powerful tropes in the cultural texts since the 19th century. First of all, the main character, a wealthy and privileged young man of upper middle class, embodies all the features of a Victorian male traveller whose discourse–mainly its idiosyncratic manner–signals the privileged position and lineage. When confronted with the underneath world of “Vril” and its unearthly energy, he is fascinated with the possibilities and potential of this advanced civilisation. However, while exploring and mapping the realm of the underground, he– as an introspective observer acquainted with the western ideas of the arts and culture– appears to commodify the territory and its inhabitants, gradually trying to universalize this world of diff 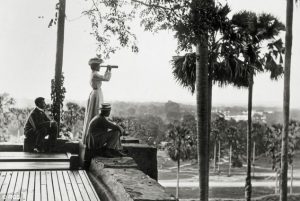 erence. This eventually contributes to his apocalyptic vision of the future that does not allow him to leave the molar line–that of being, Western identity, fixity– and form a new connection with the non-human, becoming inhuman. In fact, both his fear and fondness of the otherness, which results from the imperial desire to consume the difference, reproduce the same dichotomous scheme and thus the western perspective once again is recoded as being superior. In this respect, if we take into account Rosi Braidotti’s understanding of the posthuman as a process of negotiation and sustainable transformation with multiple others[1], it seems that the main character while encountering the non-human fails to become-minoritarian; and thus he is not able to go beyond the symbolic organisation of power.

2 Comments on "Western Gaze and the Non-human"

Member
Jelica Veljovic
I liked very much how you have linked the novel’s protagonist and the posthuman notion of overcoming hierarchies, breaking boundaries and making step toward the Other. That is how it is possible for us to conclude that novel also opens up teh question of the fear of the Otherness as fear of the unknown or of the “unheimliche” as Freud suggested. However, even though this was obvious in the XIX century, as a kind of a textual inconsciousness and idelogocal incursion of extratextual in Buwler-Lytton’s novel, it seems to me that nowadays posthuman tendencies aspire to overcome precisely these humanity’s… Read more »
Vote Up0Vote Down  Reply

Member
Helena Hunter
I enjoyed your critical reading of Edward Bulwer-Lytton’s novel and your analysis of the nature of the western gaze as it plays out in the story. You contextualise this as characteristic of western representations of the unknown in cultural texts after the 19th century. I would add to this that the text also exhibits problematic traits of the colonial imagination -as you describe it- the commodification of ‘the territory and its inhabitants’. It is interesting that Edward Bulwer-Lytton served as a conservative Secretary of State for The Colonies under Queen Victoria in the United Kingdom. This fact greatly affected my… Read more »
Vote Up0Vote Down  Reply