In Rainer Werner Fassbinder’s film “World on a Wire” (1973), Fred Stiller, the technical director of a supercomputer program called Simulacron gets wired up and teleported to the simulated world his institute has created to investigate the unprogrammed suicide of an “identity unit.” Upon returning (via a telephone booth, just like in “The Matrix”), he begins to suspect the reality of his own world. And he is proven right. Near the end, he learns that there is another world one level above and that he is but the virtual avatar of a powerful programmer up there with the same name. Any avatar who learns this forbidden truth must be deleted—hence the mysterious disappearances/deaths of his colleagues. But Stiller is saved by his lover Eva who is a “contact unit” from the world above. She has grown unhappy with the megalomaniac programmer Stiller and fallen in love with his avatar. So she switches the minds of the two Stillers and gets the best of both worlds: the human body of the former and the sympathetic mind of the latter. The programmer Stiller, now befitted with the avatar’s presumably unreal body, is shot to death by police as a fugitive.

The movie beautifully illustrates Herbrechter & Callus’s argument that “the peril that scares us most deeply is the end of our capacity for care” (109) and that science fiction is “a cryto-humanist genre” (98) that always winds up reaffirming the humanist ethics of care. Here, Stiller the avatar proves himself a deeply caring soul because he alone remembers the vanished individuals and tries to get to the bottom of it. For this quality alone (which is an outgrowth of his having unaccountably achieved free will), he is “awarded” membership in the world “above,” i.e., he joins humanity, while his uncaring creator, the programmer, is expelled from the human club. And most crucially, his salvation is effected by a woman who dares to love across the human/posthuman divide, and whose name Eva promises the regeneration of humanity. Someday we may yet become human, by way of a perilous posthuman detour. 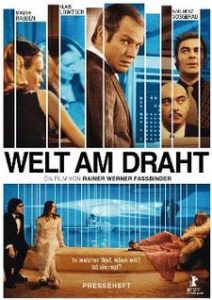 4 Comments on "“We Have Never Been Human”"

Member
Charlotte Grum
Hi Haiyan, what a beautiful way to end your post: “Someday we may yet become human”.. I wonder how you understand the ‘we’? Recalling the intro text to Lesson 4, imagining a world where some humans have been augmented through biotechnology and prostheses, leaving “the rest” of humanity behind, I wonder if humanness as well as posthumanness will always contain a differential cut as Barad (2003) would say, never creating same-ness but producing a continuous differential mattering of the world? Barad, K. (2003) Posthumanist Performativity: Toward an Understanding of How Matter Comes to Matter. In Signs: Journal of Women in… Read more »
Vote Up0Vote Down  Reply

Hi Haiyan! You gave us a very good example of the posthumanist dystopic representation of technologically improved humanity, and I would only add that, as appeared to me from your exmple, this Fasbinder’s movie reveals us some new aspects of “necroplitics” as a dangerous potential of future (in her recent book “The Posthuman”). Also, I would add, and please correct me if I am wrong, that Fasbinder tends to pay out attention to the need of grounding new ethics in accordance to the new age of humanity.

“Someday we may yet become human, by way of a perilous posthuman detour.” From futures past to the future lasts a long time, sort of….
Brilliantly put. Those that also get to be beamed upwards in these sort of Chinese box ontologies are animal pets (although ‘companion animals’ is now de rigueur), beings at the top of a petting order where it is still better to lie at the hearth than be ontologized at edible.
These staggered virtual realities, as playpen for care ethics, as you show, are what seems to happen once humans have shaken off their animal heritage for avatars.

Your last line that everyone quotes here is, I believe, a good expression of posthumanism in its most sympathetic form. I had a conversation with the British writer and comics creator Alex Paknadel (Arcadia, Turncoat) about humanism where he concluded that he believed the human was not a descriptive but an aspirational category. If we are to ever come up with a myth that will allow us to believe we can truly aspire to being human, your idea that we could get there “by a perilous posthuman detour” could be a good candidate for that.