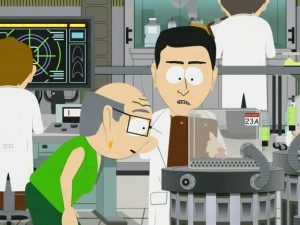 This screenshot is taken from South Park’s season 12, episode 5, which (in my comprehension) is a parody on the identity confusion of Mr/s, Garrison, due to the growing impact of genetic enhancements on transsexuality. Braidotti asks if transsexuality is a dominant posthuman topos, and we could add that:

1) posthumanism examines the modes that technological enhancements change the ways people percieve their own identities, surpassing the old gender barriers based on traditional understandings of normality;

2) biotechnological enhancement reveals the everyday self as a multiple personality (De Mul 2010: 171).

That is why Mr/s Garrison is allowed to “play” with its own gender identity, but therfore becoming the object of parody of South Park’s creators. Maybe they are expressing their conservative stands on this topic, but they are definitely showing how these enhancemets influence the identity experimentations, that sometimes overwhelm us.

Member
Mads Søndergaard
I am not entirely sure whether or not I agree that enhancement and therapy are impossible to separate in regards to transsexuality. If there is a psychological or biological justification – and I use justification here quite wrongly – to undergo sex reassignment therapy or surgery, such as being intersex (biological abnormality) or transgender (bio-psychological incongruity), then it would, if we define “therapy” as procedures that allow individuals to “return to normality”, be therapeutic. More than transsexuality, however, I would argue that the more prudent topos for the posthuman condition would be postgenderism, insofar that, if we get to the… Read more »
Vote Up1Vote Down  Reply

Author
Jelica Veljovic
Hello Mads and thank you so much for the comment. This episode was very appealing to me because it shows how polemic these questions are, and I therefore support your oppinion that the enhancement and therapy are easy to separate in question on biological and psychological neccesities. Also, I strongly agree with the idea of “postgenderism” in posthumanism because it is obvious that it deals with overcomign of all types of socially constructed dichotomies. However, I believe that Braidotti in the citation that I have selected seaked to confirm the necessity of overcomong gender boundaries, and selected the word “transsexualty”… Read more »
Vote Up1Vote Down  Reply

Member
Mads Søndergaard
Ah, I certainly agree that Trey and Matt are advocating against gender fluidity as a movement – I wanted to select my words carefully, as it is a sore topic for some individuals these days – but reckon I chose perhaps a bit too carefully. 🙂 But, that’s a different topic altogether, but I agree it is interesting insofar that it could point to a transitional period, or at least be metaphoric of one. After all, it is one thing view postgenderism as the “penultimate posthuman sex”, but a whole other thing to contemplate how it would come about –… Read more »
Vote Up1Vote Down  Reply

Transsexuality seems a paradigmatic case in which enhancement and therapy are impossible to separate and normality is thrown into radical suspension. Francis Fukuyama questions the soundness of enabling parents to manipulate a fetus in order to nip homosexuality in the bud, as it were, although it is difficult to spell out the wider social impact if homosexuality could be thus “selected” out of existence. In contrast, sex change operations seem to be one bright spot in the gloomy-to-dire picture painted by the “bioconservatives.” It can be defended on deontological, utilitarian, and egalitarian grounds.

Author
Jelica Veljovic
Hello Haiyan and thank you for the comment! I also agree with you, as I believe meny participants of the course would, due to the fact that posthumanism reveals tendencies towards a gender-free society (as Mads mentioned, a “postgenderism). That is why I believe that this is one more way that posthumanism opens as a postidentity field, allowing us identity experimentations. However, it is crucial in all that to pay attention to gender fluidity as a nowadays trending, which leads us to emotional confusions and socially triggerd experimentations. I believe that South Park creators seaked to parody this, underlying the… Read more »
Vote Up0Vote Down  Reply