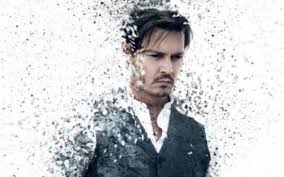 Despite  Herbrechter’s negation of “transcendence” (2013:3), the film Transcendence could still be an example of the posthuman concept. As a preliminary definition, one could say that the posthuman represents a shift towards concepts of organic and inorganic systems, human enhancements and combinations of the biological with the technological.

In accordance with Burnham’s statement that: „As the drama of self-awareness and scientific discovery unfolds, we near a point where self-inflicted evolution becomes an imminent possibility“, Transcencence takes the information processing system, that is he human brain of Will Caster, to digitally transmit it into another information processing system, i.e. a sentient computer. Copying this fragmented but crucial part of our human selves, Will’s consciousness is also transmitted. As a result, the computerised Will is not merely a bodiless new version, but has enhanced his formerly human state, and thus reflects on a posthuman idea. Will now has access to any digitised knowledge and controlling mechanisms via worldwide networks.

After building his own independent Utopia using fossil free energy, he develops ground–breaking technologies to improve all life-forms and eradicate environmental pollution. What is most representative of the posthuman idea in Transcendence, is that this AI does not intend to supress or exploit weaker forms of existence. Although he substitutes and destroys functioning systems, Will is merely driven by his love for his wife Evelyn.

However, in the dystopian manner Evelyn constantly asks herself whether Will is really “himself”, which eventually leads to his destruction and a gigantic blackout, resetting the world to an age without technology. Therefore, the film contrasts a natural status and a natural (human) evolution with a technological, transhuman evolution. Yet it does not condemn the possibilities such an evolution might offer human and ecological systems together. It rather asks: What defines us as a species at the core? What footprint will we leave in the post-anthropocene future, once we evolved or vanished? For these reasons, I would like to propose that Transcendence still reflects the posthuman at work, although it needs to be further addressed whether its definition of “transcendence” clearly moves above a simply spiritual one.

3 Comments on "Transcendence: A utopian or a dystopian view into a posthuman future?"

Member
Desiree Förster
Thanks for that interesting post! Unfortunately I haven´t seen the movie but I would argue that this form of the posthuman that is displayed here – as an enhanced, “better” self (!), that even is driven by romantic love… – clings very much to the human in the classic humanist sence. The idea of an identity, that is autonomous, that is capable of love, as well as the idea of progress, are clearly characteristics of that traditional thinking of the human and is joining the grand narrativs that Herbrecht is rightly criticizing. But it gives a starting point for analyzing… Read more »
Vote Up0Vote Down  Reply

Member
Mads Søndergaard
[*** Wordy post again, not part of the assignment process, so feel free to skip if need be — not sure if I should be asking permission to post in a more discussion but less professional manner :X ***] Good ruminations – and very close to my own, I must admit. 🙂 I haven’t actually seen the film – I have to keep a better handle on upcoming/recent films, I recall seeing the trailer before, not sure why it dropped off my radar again – but a few interesting things did pop up just from the trailer. So before I… Read more »
Vote Up-1Vote Down  Reply

thanks a lot for your thorough comment on my post. Our examples are very closely related indeed. I am hoping to answer your question as soon as I have made up my mind and found the time ;). Also thanks for recommending Westworld. Heard about it form other people as well, so I guess I’ll have to watch it now :).