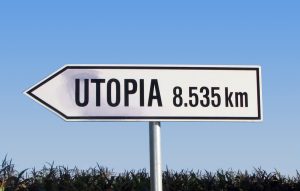 Fiction has always offered us a playfull ground for revisiting our civilization, and also for testing its possibilities, its directions and consequences. That is why science-fiction works can function as a laboratory for investigation of future forms of life, as Wamberg suggests for the art in general (2012: 151). It seems that it is what Bulwer-Lytton did introducing to the readers of 19th century possibility of a different superior civilization called Vril-ya. The fascination with the development of tecnology and machines seems to inspire him to imagine its future possibilities and development, according to the Darwinistic theories of progess of life. Introducing the notion of Vril energy, Bulwer-Lytton has transmitted the development of the material (phisic, machinic) to the abstract and inmaterial field (energy, intelligence). Therefore, he offered us a view into the civilization that is cognitively and mentally progressed and improved. This kind of improvement resulted in further development of the Vril-ya civilization, and the clash of all hierarchy: national and ethnic (which doesn’t exist for them), gender (masculline and feminine are the same) and language bariers (due to their possibility of parapsychological language acquisition). This utopic civilization seems to overcome all the problems of humanity, and it can be generaly marked as the relation to the Other! The Other is respected as the Same, so Bulwer-Lyttin offerd an improved mode of human relations overcoming the wars, language barriers, criminal, but also the species differences – one of the most important posthuman tendencies. Vril-ya’s possibility to adapt to the Other is related to their bond to the Nature and Vril energy because they have adopted the rhytm and power of nature, expanding the notion of Life towards the non-human also, which Braidotti (2013: 50) would call “zoe”. It is how Vril-ya’s naarative is constituted, making them posthuman even more then their technological prossperity. And that is how this 19th century utopia novel responds to necessities of our modern (posthuman) world. The basic prrof of that is that 20th century writers like Ursula Le Guin or Edgar Rice Burroughs seem to continue the ideas of Bulwer-Lytton.