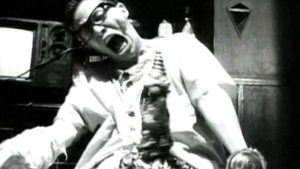 Tetsuo: The Iron Man (1989) is a rather obscure take on enhancement. Tetsuo, a typical salary man accidentally kills ‘the metal fetichist’. After this accident the spirit of ‘the metal fetichist’ haunts Tetsuo by growing metal scrap parts on his body. Tetsuo does not choose his ‘enhancements’ and in the still above Tetsuo’s penis transforms into a abnormal drill with which he accidentally kills his girlfriend.

2 Comments on "The Shame of Enhancement"

Member
Ângela Longo
Hello Mads, first I personally think that this movie and the subsequent sequel are amazing examples of enhancement and abnormality. Tetsuo has many things that I find interesting, the death of the metal fetichist is linked to paranoia and violence towards Tetsuo and his relation with others (such as his girlfriend). It is a virulent enhancement, it is like a disease that he has no control of. The metal fetichist is a kind of parasite that enhance Tetsuo bodies, but it also destroys him. The enhancement of Tetsuo is not a pacific one, he is caught up into it. In… Read more »
Vote Up0Vote Down  Reply

The penis drill is scary as hell and I like that this film investigates the horror of enhancements out of control. It is not hard to imagine a future where everything can be done to enhance your body, but it is difficult to see every consequent of such enhancements.