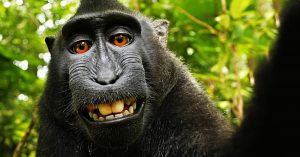 Herbrechter notes that “A critical posthumanism therefore has to question humanism even in the form of its own critique” (15). Therefore I am interested in thinking about how we critique ‘posthuman’ art within a worldview that is mostly humanist.

While reading the assignment texts, I was struck by the emphasis on technology and on the loss of the human in art. However, the readings make a couple of assumptions that would be undermined by other posthumanist thinkers.

The image I have chosen is a part of a prolonged lawsuit involving a BBC photographer named David Slater and a certain macaque who took Slater’s camera and shot several selfies, obviously following the usual form for making those types of pictures. The selfie I used is the one most often attached to memes, and the one that David Slater sued to keep people from using. He has a British copyright to it, but PETA says that the monkey should own the copyright. As of January 2016, the federal courts in the U.S. have ruled that no one can own the copyright, since the animal is not legally a person, but copyright can only be claimed by the one who took the picture, not the one who owned the camera.

There are a couple of issues here that move beyond the entrenched humanism of the readings. One is the lack of a definition about what constitutes a person, and how we see the personhood or agency of another creature and another is how agency and personhood is caught up in the idea of making art. How does one define art? How do we establish who or what is creating and its value? Luhmann makes a distinction between “perception and communication [that] charts new territory for aesthetics as an academic discipline” (15) and that overturns the idea that “art is a special kind of communication, designed to supplement and extend verbal communication” (15).  In order to do that, art would depend upon both the creator and the observer making cognitive connections about the art and to verbally communicate their understanding and intentions or that art is intended to be “understood.” However, art within this worldview is suborned to the privileged verbal (human) communication. Technology undermines this and puts the lie to the privilege by   as Sedlmayr despairingly notes, the “destruction of [the human’s] original subjective center” (153), and breaking down the conditions under which man (or the human) can survive. Technological evolution blurs the distinction between human and machine, but, as we can see with the lovely macaque above, with his beautiful smile, it also makes available a distinctly non-verbal communication through reproduction of form that allows analogy of human to other species. Perhaps those other species are evolving as well.

2 Comments on "The Posthuman and the Monkey Selfie"

Member
Jennifer Charteris
Thank you Maria for your thought provoking blog. Thanks also for the definition of critical posthumanism. Is this implying that the deployment of technologies and frameworks for critique require examination? It is an interesting to decentre our speciesism and recognise the posthumanism agency of animals. However, what does this mean when we embrace posthumanist agency? This would be different to applying a humanist lens to agency (eg. self-determination, having choice, making decisions, being an individual with efficacy). What happens when we see agency as flows between human and non-human elements co-produced in assemblages? Your post makes me wonder how can… Read more »
Vote Up0Vote Down  Reply

To me, this is one of the fundamental discourses that should be occurring in posthumanism. We seem to be very concerned with human art and technology and the evolution of the human through technology, but we have not even fully understood ourselves as animals and we seem to evade an engagement with the natural world. The court documents requesting dismissal of the monkey-selfie suit are dismissive of the very idea of an animal as artist, and certainly of an animal attempting to bridge a communicative gap with humans.