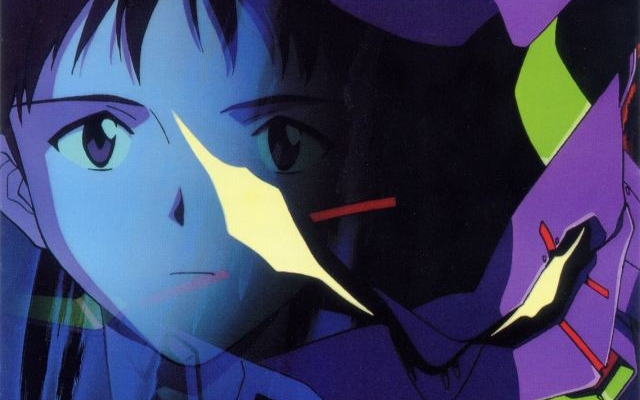 In the Japanese post-apocalyptic animation series Neon Genesis Evangelion (1995) set in futuristic Tokyo, humanity is systematically attacked by an alien species named “Angels”. Immune to conventional weaponry, mankind’s last hope is the mecha called “EVA”: A giant biological machine, which can only be piloted by selected adolescents. 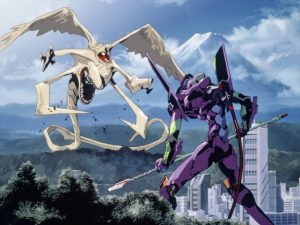 EVA (on the right) battling an Angel (on the left).

One of the pilots is the protagonist of the series, the 14-year-old Ikari Shinji, who must fight the Angels in order to save humanity. This is a seemingly classical narrative, but the character gallery and execution of the plot are far from conventional: Faced with the responsibility of saving the world, Shinji reacts with extreme insecurity, fear, and denial.

In this way, he is the exact opposite of the archetypical hero, who uses his bravery, strength, and willpower in order to overcome his enemies. Dependent on the mechas for survival, Shinji still struggles to be free from the machine and his duty. And as the pilots in Evangelion spiral into psychological despair, they can no longer successfully operate their EVAs. Therefore, the posthuman in Evangelion is portrayed as fatal because of its fragility: The characters are in constant conflict with their emotions, even to the point of leading themselves into extinction despite their technological advancements.

As a stark contrast, the Angels gradually become more skilled in exploiting the weaknesses of their human opponent: From the first attacking Angel with a bizarre humanoid appearance, to a later form which forces the opponent to recall traumatic and suppressed memories, inflicting psychological terror upon the victim. And finally, an Angel which resembles a human being, befriending Shinji before revealing his true origin.

The appearance of the Angels reflect the becoming of a superior posthuman form, which is echoed in Jean-François Lyotard’s essay “A Postmodern Fable”:

The human species is not the hero of the fable. It is a complex form of organizing energy. Like the other forms, it is undoubtedly transitory. Other, more complex forms may appear that will win out over it. (Lyotard 1993, p. 93)

In the same way, the Angels mock the anthropocentric ideology while punishing humanity for acting as substitutes for God by developing new biological machines. And yet the series present the new gospel – the new grand narrative – of human evolution within posthumanity. The question remains whether or not humanity will overcome its shortcomings in time.

2 Comments on "THE FRAGILE HERO: UNDERMINING THE ANTHROPOCENTRIC IDEOLOGY"

Thanks for an interesting post. I think that the series also pose some really weird question in regards to the robots that Shinji and the other characters use. They are at a risk of becoming engulfed by the machines if they lose control over it. I think there’s a similar concept going on in the Attack on Titan series with a slight difference, though. Here the machines are giants instead and perhaps this marks a shift in the mecha-narratives of anime?

Yes, the relationship between man and mecha is definitely complex: Especially considering how the machines operate on power supply (interestingly named the “umbilical cable”), and yet can go berserk even though the battery has run dry, much to the surprise of its creators. This is an important turning point for the people involved in the project, as they realise that the robots are not humanity’s obedient pets. I have yet to watch Attack on Titan, but I must come around to it soon!