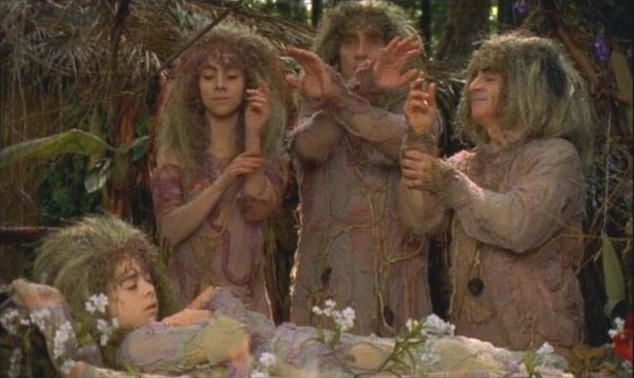 In ”The Coming Race” by Lord Lytton, we are introduced to a subterranean terrestrial race known as the ”Ana”.
They are described as comparatively calm and at peace with their lot in life; there are no social institution or dogma that is troubling for any group of peoples in their society, there is no inter-cultural unrest (or, arguably, even an ”inter”-culture, as much as one single global culture). They are free to pursue any profession, they have some form of gender equality, but yet still maintain cultural differences between the genders – as if Lord Lytton is trying to sneak in his female ideal, rather than an egalitarian community.
Their physical make-up is described as equally serene – not entirely alien, but as humanlike, yet with an alien air about them; as if their physiology has evolved to no longer need to convey social interaction (e.g. Disgust, anxiety, sorrow, etc.), but instead in a constant state of calm and collectedness.

Their sociological structure is somewhat reminiscent of H.G. Wells ruminations on a posthuman structure. We know the race has existed for at least as long – most likely longer – than humanity has, but that they do not suffer from overpopulation, inequality, or – apparently – disease. Much like Wells foreshadows a posthuman race where inequality and overpopulation is eliminated by active intervention – although it is never stated if this state came about as a result of active intervention.
Conversely, however, we see a ”Spiritual singularity” being the progenitor of this state: A force (Vril), which seemingly allows the Ana to not only commune with other life, influence weather, and activate machinery, but also a force that seems to have its own agency (i.e. Maintaining cavern temperature, wild-life, etc.)

In this last sense, the Ana seem to be in a posthuman stage, while their sociological, cultural, and technological levels are arguably only straddling the border between human and posthuman.

Image taken from “Stargate: SG-1” Season 1, Episode 8, “The Nox”, depicting the “Nox” race – a super-advanced civilization that has reached a ‘Spiritual Singularity’, allowing them great control of etheral forces in the world – here performing the “Ritual of Life” (resurrection/healing).

Dear Mads, thanks for pointing out that the Vril seems to have some agency of its own. I think this is a very important point in order to read the text in a critical posthuman sense. Conceding agency to something asks for a certain discernement and responsibility in encountering (rather than using) it – an understanding that ultimately comes with the knwowing that the autonomous humanist subject that is superior to all other entities, is replaced by networks, meshes, or interpenetrations of agencies, that the human is only a small but powerfull part of.