I was unable to get hold of Posthumanism: A critical analysis, so I read parts of Rosi Braidotti’s The Posthuman instead. According to Braidotti, the criteria that define the posthuman are numerous, but as a critical method, it replaces social constructivism with the nature-culture continuum. This shift has significant ramifications for human subjectivity and the practices of the Humanities as well as for political analysis and progressive politics. Professor Wamberg’s lecture situates her in the cautiously agnostic middle ground between two extremes: utopian transhumanism that dreams of human enhancement and techno-transcendence and the dystopian anxiety about the excesses of technology and the threat of climate change.

Critical posthumanists like Braidotti and Wolfe celebrate the breakdown of all manner of dualisms, most notably art-technology, organic-inorganic, human-animal, body-machine, and mind-matter. The alternative, non-unitary human subject they envision is, as Prof. Wamberg points out, radically different from the Übermensch or New Man of Nazi or Communist pedigree. Instead, the posthuman is predicated on “an enlarged sense of inter-connection between self and others, including the non-human or ‘earth’ others” (Braidotti, 49). Since advanced capitalism has also embraced posthumanism by subjecting life itself to trans-species commodification, a new zoe-egalitarianism must replace compensatory humanism, which is still grounded in species hierarchy and which attempts to extend empathy and human moral and legal privileges to non-human others. The posthuman subject is instead a nomadic assemblage in the symbiotic, interactive, and experimental milieu called “becoming-animal,” “becoming-earth,” and “becoming-machine.”

To me, little of this theoretical discourse would make much sense without the examples provided in Burnham and Sedlmayr and in the first lecture. As far as the posthuman is concerned, artists are certainly ahead of philosophers. I especially like Stelarc’s “ear on arm,” an example of his “alternative anatomical architectures.” Of the many possible interpretations, I see it as an experiment with “deformity” as a way to approximate animal sensorium and intelligence – to feel what it is like to be a bat with its sonar or an octopus with its distributed brains. 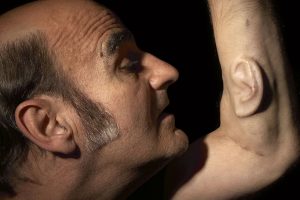 2 Comments on "Stelarc’s Nagel Experiment: What Is It Like to Hear with Your Arm?"

Member
Mads Søndergaard
Very good observations, and I agree that Stelarc’s example does allude to the question of “What it feels like to be a bat”, which has made up a good chunk of consciousness studies – some to such a degree that they’ve taken to linking our ability to “imagine what it feels like” to an indication of consciousness in the target-subject. Susan Greenfield gives a great lecture on it here. In these instances, philosophers (and scientists) certainly are on par with artists in tackling the question, but more in terms of “getting there” than “what it’s like to be there”. Seeing… Read more »
Vote Up0Vote Down  Reply