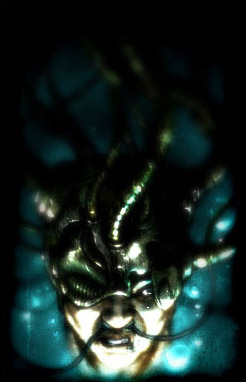 “This is a capsule,” Anu said to the Caldari. “It is used to control a ship. With it a ship a big as this one can be controlled with only a handful of crew and smaller ships, like your frigates, can even be controlled by a single person.”

“How is this possible?” Ouriye asked. He was obviously skeptical, even if he didn’t seem as surprised by what Anu said as the other Caldari.

“The controller, captain if you like, of the ship is stationed inside the capsule. Through it, he’s neural rigged to all parts of the ship. The capsule is like one gigantic computer, with the captain at the core, controlling everything.” Any answered.

The above is taken from EVE-Online’s short story ”The Jovian Wet Grave”, which introduces the inner-workings of a central piece of technology in the lore: the ”capsule”.

As evident from the above snippet, this technology is, in essence, the birth of the posthuman – more specifically, Sedlmayrs ”balanced posthuman”, in posession of both their spiritual and material side.

However, like most posthuman ruminations, it lacks one essential part; it neatly skips the problem of consciousness. We neatly and untroubled skip across the subject like we all innately know what, why and how consciousness is.

Pirkotan sat thoughtfully, scratching the back of his neck. It was still sore after the operation. While berthed on the Ishukone station Ouriye had encouraged Pirkotan to have neural implants inserted into his spinal cord and cerebellum, saying that it would definitely further his career.

Pirkotan, our (unfortunate) protagonist, has undergone extensive and invasive neurosurgery, allowing him to control an entire interstellar spaceship (sometimes the size of a small moons).
However, we’re never told if this Pirkotan is still Pirkotan.
He has however – as Sedlmayr would be happy to notice – transformed into a ”balanced posthuman”; his body is intact, but so is his spirituality.

It’s unfortunately a common subject matter to be skipped; proverbial LEGO blocks socketed onto one another without ever inter-reacting to create fresh new shapes. But we know that both information input and neural placement impacts neural development negatively (Wiesel, et al., 1963), or takes immeasureable time to train to use in the first place (Ward, 2015).

Even more despairingly, the fountain of inspiration that usually is science fiction, is just as silent; as if both science and art is in agreement that Consciousness is simply too scary to contemplate, because they can’t even begin to decide where, why, or what it is, or if it even is.
It simply is or isn’t.

In the realm of EVE-Online, this is the birth of the most ‘pure’ example of the posthuman, but not the first posthuman civilization (all civilizations in the lore are or were Human; all are arguably posthuman).
In terms of Prototype theory, it’s the point where ”human” becomes a super-ordinate category.

References:
-Burnham, Jack. “The Future of Responsive Systems in Art”, from Burnham, Beyond Modern Sculpture: The Effects of Science and Technology on the Sculpture of this Century, New York: George Braziller, 1987 [1967], pp. 359-76.

6 Comments on "Representation of consciousness permanency in media"

Member
Maja Tingberg Kruse
Hi Mads! This is a very interesting subject! Your essay made me think about the book “’Hard-boiled Wonderland’ and the ‘End of the world’” by Haruki Murakami, that in my opinion (and if I understand you correctly), explores the questions of the nature of consciousness in a more direct way. Aside from being an amazing book on many levels, its main theme, in my opinion, is consciousness and posthumanism, and could perhaps be relevant to your research on the subject. I think William S. Haney is spot on in his “Cyberculture, Cyborgs and Science Fiction: Consciousness and the Posthuman” when… Read more »
Vote Up1Vote Down  Reply

Cheers for the feedback! Much appreciated. 🙂
And thanks for the recommendations – already have some of Murakami’s books lying about (comes with the territory of my BA, I suppose), but wasn’t aware of the one you mentioned, so very helpful indeed! ^^

your example reminded me of the film Johnny Mnemonic (1995), where Johnny gets a cybernetic brain implant to transport sensitive data. However, he lost is childhood memories due to this chip. Which brings me back to Pirkotan: While Pirkotan represents, as you argued, the “balanced posthuman”, Johnny has lost parts of his own character, i.e. his memories, a change that is easily detectable. I was therefore wondering how we can be sure that Pirkotan is still Pirkotan and hasn’t lost any part of his personality as well? I guess there are no indications for that given in the text?

Author
Mads Søndergaard
Cheers for the feedback, and excellent point! It was more or less what I was trying to get to as well. Both in science fiction and in science in general, the exact nature of consciousness is largely ignored – we tend to assume that, for example, “uploading a brain” will automatically transfer the consciousness, or if they’re particularly brave, proffer that it is merely copied (See “Soma”), The sad fact is that we can’t be sure if Pirkotan actually did survive the procedure – according to the background lore, the Jovians (hyper-advanced human race) created both the capsule and as… Read more »
Vote Up0Vote Down  Reply

Hi Mads,
Your post is a great starting point to think about the mind-body problem, that is addressed by many different disciplines – both humanist and “hard science”. One possibility to think about it is with Maurice Merleau-Ponty and his term of the chiasm, which combines subjective experience and objective existence. It basically describes a new conception of the body as ‘flesh’ (chair) which provides access both to subjective experience and objective existence. See for example “The Phenomenology of Perception” , where he outlines the ambiguous status of our bodies as both subject and object.

Author
Mads Søndergaard
Hi Desiree, Thanks for the feedback. I’ll give it a look – but I’m already leafing through the various (plethora!) of theories concerning the mind-body problem – my overarching problem with them so far, however, have been that they first and foremost attempt to explain how consciousness is formed; how physical events transfer to phenomenological sensation, or as you say, how the subjective can be married with the objective. Obviously – some would say – this is part of the function of consciousness (some would say it’s the progenitor of consciousness), but either way, they often stay at a tangent… Read more »
Vote Up0Vote Down  Reply