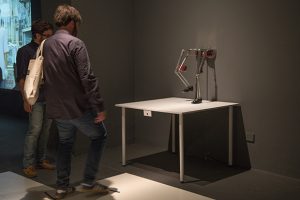 My understanding of posthumanism draws from Rosi Braidotti’s The Posthuman 2013 and Cary Wolfe’s What is Posthumanism 2010. I am interested in critical posthuman theory and how this functions as a ‘navigational tool’ and ‘ethical compass’ (Braidotti 2013) to navigate the complexity of the times: characterised by techno-scientific acceleration, ecological crisis, advanced capitalism and increasing social political instability. Furthermore, I see posthumanism as the opposite of transhumanism and its tendency towards abandonment of the human in favor of enhancement and bio-technological advancement or as Wolfe puts it, its instance on: ‘transcending the bonds of materiality and embodiment altogether’ (Wolfe 2010).

If I am to consider art in relation to the posthuman, I would refer to artworks that do not simply represent or illustrate posthuman thematics. I would like to advocate for more attentive, accountable critical works that raise questions about the nature of ethics and subjectivity in our times. I recently encountered Heidi Kumao’s Protest (2015) at CCCB in Barcelona. The work consists of two aluminum legs the size of a 6-year-old child wearing tap shoes standing on square white table. The limbs are fastened together by steel bolts, the motors are visible and red wire curls from the joints into the wall where the legs are fastened. As gallery visitors approach the robot it does not mimic, it disobeys, stamps loudly, resists and even plays with the responses and reactions of the visitor. It is irregular, unpredictable and at times downright petulant defying demands and expectations through its movement. It resists the kind of robotic subjectivity currently being developed and marketed across the world to service purely human needs and appears to have agency of its own. I would consider this work post-anthropocentric and therefore posthuman as it deals with non-human agency critically, ethically and most importantly with a sense of humour.

Wolfe, C. (2009) What is Posthumanism? Minneapolis: University of Minnesota Press

Member
Ângela Longo
I agree with your position: an artwork has to engages critically and furthermore ethically with our times. I didn’t know this artist but it strikes me as a powerful work. When I look at the pictures the robot has legs and shoes in a anthropomorphic way but it disobeys or act with their “own” will. Power of control is at stake here, also the hubris nature of creating. What I like the most is the union of this with the title “Protest”, it puts agency on something that it isn’t alive. It put’s thought in movement and art, it’s protest… Read more »
Vote Up2Vote Down  Reply

Helen I really liked your example, because it shows the possibility of independent development and improvement of the machinistic bodies such as robots, and their further gaining of consciousness separated from human-like form! It is certailny one of the biggest posthuman and transhuman dilemmas and discussions.