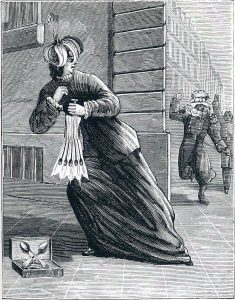 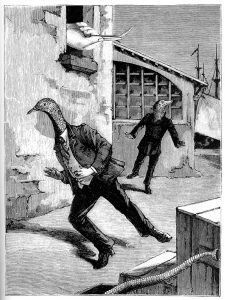 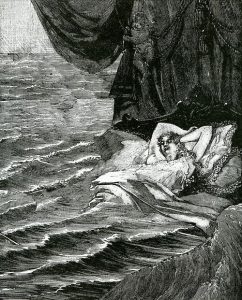 Max Ernst may have called Une Semaine de Bonté (Week of kindness) a ‘Novel’, but to actually treat is as such is quite impossible. It mainly consists of printed collages which Ernst put together using illustrations for books and advertisments alike.

One of the striking things about Ernst’s works in collage in general is, that he saw collage as a means to take himself out of the process of creation, let chance guide and let the pictures find their own form. In the broadest sense these pictures therefore are the product of an evolutionary process rather than artistic creation as it is converntionally understood. Though it remains arguable in how far any work of an artist can be owed to chance alone it has to be understood that the artist’s intention of taking himself out of the process of creation in itself already can be seen as a posthuman gesture. But aside from that, what is even more striking in Une Semaine the Bonté is it’s content. The novel as a whole is awash with pictures showing scenes of everyday human experiences inhabited by non-human characters: hybrid creatures, partly human, partly animal are interacting with each other and their environment. And even in those few pictures in which humans in the traditional sense take center stage there is seemingly always something humanely impossible taking place, be it interaction with dragons or what appears to be a conjuring of some sort. There is a sense of what Braidotti only recently described as the Posthuman as Becoming-Earh and Becoming-Animal to be found – although not yet of Becoming-Machine.

I would argue, that aside from the artist’s decision to let chance take over the artistic process, the collage of human-animal-nature-culture in itself challenges man’s anthropocentric views.

Interesting early example of the posthuman! But what I find most engaging in your post is the idea of the artist as distancing him or herself from the creative process by collage. This is a very interesting notion, because it touches the question of what it means to be a (human) artist. When, indeed, are we creative? One could say, that written text is just a collage of known words strung more og less successfully together.

Thank you for your comment. The surrealists did indeed experiment with language as well, as they first and foremost developed as a literary movement. If you are interested in reading more about the latter I would suggest you look into Cadavre Exquis, a parlor game they experimented with in collaborative writing. The question of authorship is something premeating surrealist artistry in all fields. While other surrealist painters did work more with association it was Max Ernst who really loved to experiment with the implications of chance in creative processes.