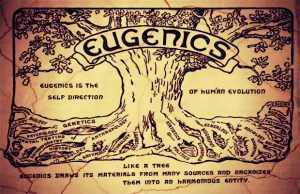 As Laura Søvsø Thomasen points out it in her video lecture, Bulwer-Lytton, Samuel Butler, H.G. Wells and others, were writing about their own present using a metaphorical  future.  The Coming Race, in particular, is a warning to the British public of Bulwer-Lytton’s time about the dangers of too much democracy and the threatened degeneracy of the white race. There is a reason, after all, for the narrator being American.

“The struggle of intelligent and energetic minds throughout the world to clear out their own lumber and get together for the conscious control of the affairs of the strangely mingled multitude of our kind, to develop the still largely unrealized possibilities of science and to organize a directive collective will, is the essential drama of human life” (Wells, Huxley, and Wells 876).

That collective and scientific control is the aim of the Vril-ya in The Coming Race. “No happiness without order, no order without authority, no authority without unity” (22) and that unity is encouraged and developed through scientific approaches to education and breeding among the population. In Wells, Huxley, and Wells, they see science as eventually having “a direct reproductive policy, and [that it ]will be working for the emergence and selection of certain recessives and the elimination of this or that dominant” (879). The vast rabble that hold back peace and prosperity will be eliminated as a drag on the scientific society. The fact that the Vril-ya, who have achieved this ‘utopia’ are probably descendants of ‘savages’ who were isolated by the great flood is a warning of the white man losing his ascendancy and the possibility that science will be impeded from helping his development. That these nineteenth-century ideas (along with phrenology, germ theory, and Lamarckian evolution through use, all present in The Coming Race) were still in the ascendant in 1929, between the world wars, is positively chilling. It is possible that the same ideas still color our own “utopian” visions of the posthuman.

Really interesting connections to white anxiety! I also noticed the connection to Noah and the ethnocentric plot points — thanks for learning English, ascendant race! But I am not surprised at their continued relevance in 1929, as the post-WWI era was rife with theories of eugenics and racial supremacy on both sides of the Atlantic.

Thanks for the comment. I’m not surprised by the eugenics thought and science, so much as saddened that the consequences seem okay to the people reading and writing these books. Living in the Trump age, I guess these anxieties just don’t let go….

In literature and filmic culture now, we have a fear of degradation(zombies) and a nostalgia for old masculinity (Westerns)