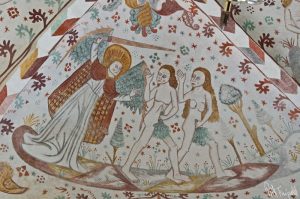 Edward Bulwer-Lytton’s “The Coming Race” tells the story of a wealthy traveler who by accident ends in a subterranean world populated by a tribe of super-beings. He is kindly received and learn about the community through conversations with his host and guide, the magistrate of the community and his daughter Zee. Through the conversations and by experience he learns, that their special powers are related to their use of “vril”.

Vril is a special energy, which they have learned to control and which gives special powers for both healing and destroying. The book is published in 1872 and it is easy to see connections to new inventions based on H.C. Ørsteds discovery of electro-magnetism in 1820. Beside the enthusiasm with all the new possibilities made at that time, an increasing realization that not everything was for the good occurred. Electricity and new inventions could both be dangerous and helpful and that duality is also characterized in vril seen from the travelers point of view.

The traveler (and narrator) is interrogated about the society he represents. He does his utmost to describe it in the best way but despite of that his host find his description uncivilized and almost barbarian both in its technological development and its philosophical insight which makes the narrator both annoyed and worried. He also realizes that the subterranean beings over time will be so numerous due to the healing character og vril, that they will not have enough space underground and therefore ultimately will have to take over the surface of the earth.

Realizing the powers of the subterranean beings and despite of the high ethical standards they practice in their community with respect to both other livings and the environment as such, the narrator finds it threatening that mankind on the surface of the earth should give up its superiority and it introduces a new form of self-knowledge of man.

1 Comment on "Man’s superiority challenged – the second fall of man?"

Hi Lars. I enjoyed reading your post and the notion of a second fall via comparison with superior beings. The fact that their ‘high ethical standards’ will count for little when survival is at stake is also interesting, as it forebodes what the gloomier predictions about climate change and the resulting ‘broken world’ will do to humans’ supposedly pristine moral systems. It might turn out that much-frowned upon utilitarian considerations will prevail in such a situation.