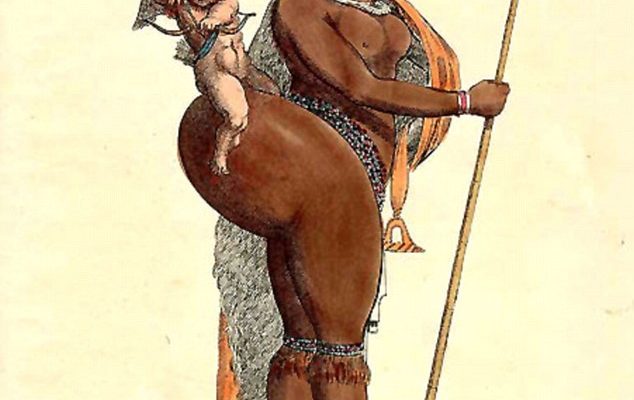 “The Hottentot Venus – just arrived…from the banks of the river Gamtoos, on the borders of Kaffraria, in the interior of South Africa, a most correct and perfect specimen of that race of people.”

Thus reads an ad in a 1810 London newspaper, promoting Saartjie1 Baartman, a Khoikhoi2 woman part-owned by the British military doctor, Alexander Dunlop, and to be paraded in Piccadilly Street as a freak. In 1814 she was sold to a certain Reaux, a Frenchman who showcased animals, and who displayed Sara in a cage next to a hippopotamus.

George Cuvier, a French naturalist then got permission to study Saartjie as a science specimen. He concluded that she was a link between animals and humans. Upon her death in 1815, Sara’s brain and genitals were pickled, and put on public display at the Musée de l’Homme until 1974. Her remains were returned to South Africa in 2002, eight years after a request from then president Nelson Mandela.

This abject history illustrates the well-worn dangers of appeals to normality, etc. Baartman was paraded as the opposite of a Caucasian female, objectified and poked fun at by colonial Londoners. The cartoon shows Cupid ‘riding’ her buttocks, and warning readers to watch their hearts. The bottom legend reads “Love and Beauty.”  This African beauty was also seen as  masculine because of her love of smoking. Baartman had a lit pipe3 when she first appeared on stage.

Apart from her intermediate limbo status between two zones of normality, that of European humans and animals in general, there are suggestions of sexual primitivism as well, hallmark of the savage. 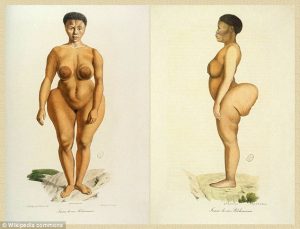 Baartman’s body was also the foundation for scientific racism. Cuvier used her body to create a borderline between the ‘abnormal’ African woman and ‘normal’ European woman. Ironically, within a few decades European women had begun wearing a bustle, a framework worn under a dress that made their bottoms seem bigger.

And so it goes…

Hi Leon.
Thank you so much for bringing our attention to the grotesque social construction of normativity, recalling also the human zoos, the public exhibitions of ‘primitive’ (non-white European) humans of the 19th-, 20th-, and 21st-century. I wonder though how and if we ourselves are able to transgress or think beyond contemporary racialized structures and discourses – not even being a ‘we’ but a heterogene bunch of priviliges, ressources and other capitals.

Hi Leon! Thank you for your interesting piece. I think your case shows very well how the conception of the human has evolved over time. From the imperialist neglecting the african as subject is it now known that there is no such distinction between humans with different ethnicity. Maybe the posthumanism in its anti-anthropocentric comprehension is a way to think beyond contemporay radialized structures and discourses as you ask for Charlotte? It calls for an accept of the world around us as independent agents and a radical openness against it.

Member
Sebastian Edin
Hi Leon, Thanks for yet another sharp, thought provoking post. States an excellent example of, if you will, Western science and the production of knowledge. Funnily enough, Foucault (yes, and it’s the same interview I referred to in my own post yesterday, it’s about all I can do nowadays not to scribble his name all over the walls foaming at the mouth…) mentions in an interview with Dutch television how Western man—confronted by for example madness, “sexual deviations” and foreign cultures—has only gained knowledge through acts of violence and oppression: “Maybe could we also say that in order to know… Read more »
Vote Up1Vote Down  Reply