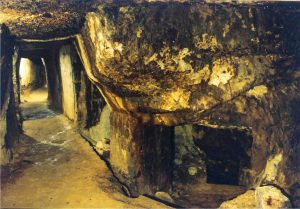 This short essay is a close reading of pages 1-12 of Edward Bulwer-Lytton’s The Coming Race (1871) and focuses on the initial encounter of protagonist with the ‘Vril’.

In Edward Bulwer-Lytton’s The Coming Race (1871) the ‘other’ beings, discovered in the underworld of the mine, are at times referred to as similar in nature to humans. Bulwer-Lytton describes the sound of this alien world as ‘a hum as of human voices’ and as ‘forms that seemed to be human’. There is a similarity yet a strangeness to these beings who are described as living in a human-like world with evidence of ‘art and culture’ agriculture, landscapes that have vegetation and irrigation, methods of transportation and even light. However, Bulwer-Lytton makes strange this world, for example after bringing our attention to the organic rock of the mine, he refers to the buildings in this underground world stating that they ‘could not be mere natural rock’. When referring to the bodies of the beings he describes them as ‘forms which seemed human, at least they were living an moved’. This specific reference has an uncanny nature to it, suggesting that the movement and form confirms  their human nature and seems familiar, yet the description of the beings as ‘forms’ suggests an inhuman or nonhuman entity. This uncanny doubling of the human could be compared to a robot , that at once exhibits human forms, shapes, movements – so is animated in a way that suggests the human but is decidedly nonhuman. The ‘other’ beings are also compared to ancient animals that are closely related to dinosaurs, for example the crocodile and alligator and later as a ‘monster’ or ‘devourer’ with ‘hungry eyes’ with ‘open jaws’.  It is interesting that the encounter of the protagonist with the corpse of his fellow explorer proceeds this other ‘monstrous’ appearance, again linking in with the idea of the inanimate animate life or the ‘ghost in the machine’. Therefore I would say that this story refers more to the inhuman and the uncanny than the posthuman.

It is also worth baring in mind that the author Bulwer-Lytton, a conservative, served as a Secretary of State for The Colonies under Queen Victoria in the United Kingdom. His writing about ‘other races’ and ‘monstrous’ others in this context could be problematically associated with the colonial violence, oppression and domination of indigenous people by the British Army during the Colonisation of British Columbia. This story could be contextualised as one of the colonial imagination exhibiting a fear or ‘othering’ of difference – but who really is the monster here? The title ‘The Coming Race’ could refer to the gold rush in British Columbia in the 1800’s hence the mining setting for the story. The hungry and monstrous beings could also be understood as the colonialists and settlers that came to British Columbia to extract gold from the mines and the subsequent violence and conflict the erupted during this time. Is the ‘coming race’ and the monstrous apparitions he describes, the pursuit of capitalism, gold and wealth at all costs? If so, this again relates to the inhuman not the posthuman, a difference conceptualised by Braidotti in her 2013 book The Posthuman with reference to Francois Lyotard’s  work The Inhuman (1989): ‘he defines the inhuman as the alienating and commodifying effect of advanced capitalism on the human.’

2 Comments on "Inhuman: the colonial imagination and the race for gold"

I see what you are getting at with the gold rush allegory especially with the firm proof in the biographical information about Bulwer-Lytton’s professional life. However, wouldn’t the allegorical level require some more criticism of the Vril-ya for that to be the main purpose of the narrative? I mean, the narrator seems to be more focused on his amazement and in turn shame of his inferiority in regard to the superiority of the Vril-ya. I sensed a modern interpretation of Gilgamesh in the lens of colonialism in the narrative.

Hi Mads – thanks for your comments here, the short essay I wrote is a close reading of pages 1-12 of the narrative so I focus only on this first encounter of the protagonist with the underground beings, or Vril-ya as they are later referred to in the story. It is interesting to hear from you that later in the plot the dynamic shifts from this initial monstering of the beings towards a more humble perspective. However, having read Justyna Stepien’s essay here: https://open-tdm.au.dk/ph/2016/10/western-gaze-and-the-non-human/ I am still inclined to think that this position is still a troubling one.