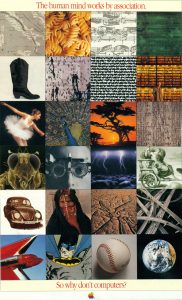 The human mind works by association. So why don’t computers? This was the selling point for Apple’s 1987 software HyperCard, which allowed the users to create their own interactive applications with multimedia and hypertext. A program inspired by its user, designed to imitate its cognitive abilities and yet insisting that the human mind is inferior to its digital counterpart. This shifts the power balance between humans and technology. For how will we as humans ever live up to our full potential if our computers don’t?