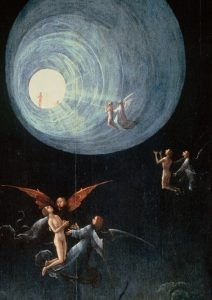 Edward Bulwer-Lytton investigates an interesting and possibly frightening situation in his novel The Coming Race: the idea of man meeting a superior being. The main (human) character is confronted with such beings when he explores the depths of a mine, and he goes on to discover an entire society of these creatures. What is striking about this new race, however, is its resemblance to mankind. Although they are taller in stature, have angelic wings and look other-worldly, like grecian statues of gods, they still appear in some kind of human form. This is what the main character and narrator notices first, and indeed is frightened by, when he discovers this people; the unimaginable and the familiar in the same person. The dread, the awe and ultimately the willingness to comply with these beings seems to stem from this weird notion of known and unknown. What also strikes the narrator right at the start of his acquaintance with the new race is their superiority in every way. The narrator simply feels dwarfed and this becomes, in a sense, an example of the human experience of the posthuman, if the posthuman is some kind of superhuman. This example points to our own future, where a race of better humans, cyborgs or just genetically improved people, may emerge. It is not difficult to imagine the sense of inadequacy one would feel towards such creatures; the same feeling the narrator has, when he is convinced that a child of the new race can crush him like af little bird or butterfly.