It seems that when it comes to techno-apocalypse, the pendulum of the human imagination is swinging further and further to the pole of total mechanical domination—think of The Terminator or Space Odyssey 2001 or the hypothetical paper-clip spewing robot. In contrast, earlier fantasies seem much more interested in prosthetically enhanced superhumans that secretly want to be merely human—think of Frankenstein. Samuel Butler prophesizes a mechanical age in which ultra-rational and unfeeling machines become the master race serviced by humans—much like how we exploit the labor of horses and dogs. But somehow unless the machines are able to mate and reproduce themselves organically, they are still dependent on human ministration and thus amenable to human manipulation.

In Edward Bulwer-Lytton’s The Coming Race, the Vril-ya are a subterranean people who have attained a technological mastery unimaginable for earthlings: they have mechanical wings and can fly; they can communicate by telepathy; and they can remove pain and induce sleep with the wave of a hand. As such they promise both salvation and destruction for humans. Zee falls in love with the protagonist and, together with her brother Taee, defies her father and saves him from death/annihilation. Once back on the surface of Earth, the protagonist warns of an impending Vril-ya invasion, implying that the earthly habitat and the human way of life shall always be the norm and constitute an enormous enticement for the extra-human. 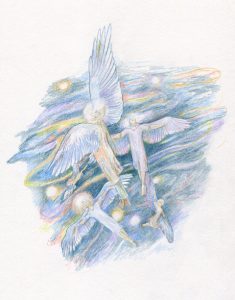 Note that while protagonist is convalescing in the subterranean world, it is his Vril-ya hosts who learn to speak English by harnessing the telepathic powers of the all-permeating fluid called “Vril,” whereas he only manages to grasp the rudiments of the Vril language. This scenario is reminiscent of countless Hollywood movies in which “our” explorer who is stranded in an alien land is thankfully spared the strenuous effort to master an exotic language because the aliens have obligingly learned “our” language. Somehow ethnocentrically inflected anthropocentrism always manages to creep back into our posthumanist fantasies.

2 Comments on "Fear Not the Machine, Fear the Human"

Hi Haiyan, really nice point about the ethnocentrism of many science fiction narratives. The focus on “our” explorer and the bending toward “our culture” strikes me as very colonial, and yet we find echoes of these elements in current films. I also enjoyed what you wrote contrasting a Frankenstein complex – non-human desire to be human – with the dominant species who merely exploit humans. These sentiments seem interconnected, desiring to be the measure of all things, even in being manipulated by another species.

Editor
Eva Krarup
Hi Haiyan, thanks for your post and for bringing up Butler’s text as well! First, I read Butler’s text as more pessimistic (due to its ending) but when I dived a bit deeper into the two authors, I found that Butler has actually written a book that was taken for a volume II to The Coming Race by the readers, and when learning that The Coming Race ends with a warning of a destruction of mankind (similar to the one found in “Darwin among the Machines”?), I gradually modified my opinion. Now I primarily see similarities. Do you agree? Or… Read more »
Vote Up0Vote Down  Reply