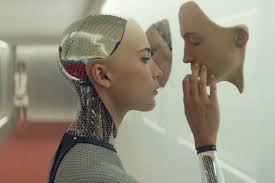 The film Ex Machina seems to ask important questions about what constitutes the human and, by extension, the posthuman.  Nathan Bateman’s technological advances in AI allow him to create androids Kyoko and Ava which can act as human as Bateman and his witness, programmer Caleb Smith.  Ava’s and Kyoko’s ability to take on the abilities and even appearance of human beings force Smith to question his own assumptions about machine life and what it means to be human, and his emotional tie to Ava suggests his own difficulty in parsing the human/machine divide.  The technological advancement of the human, both in Bateman/Smith and Ava Kyoko in different ways, accentuates the film’s questioning of our future possibilities.  The image above, with its combination of machine and human, suggests both progress and possibility but also, through the film’s plot, an unsettling of what the human is.

So the film seems to suggest that one criteria of the posthuman is to take us beyond the human, but I wonder whether the “post” must mean after – could it be that the criteria is simply the unsettling of the human or the questioning of the term and its boundaries?  I think much contemporary art and culture narrows questions of posthumanism to what we will become in the future — what comes next.  But if we can consider Frankenstein a posthuman text, then I would suggest a posthuman history could be written, and in fact that these anxieties, though theorized in compelling ways now, are long simmering.

To return to the film, I think it really forces us to examine such questions.  Ava’s escape from the Bateman compound at the film’s end, dressed and repaired to look fully human, offers a compelling visual that blurs the line between human and machine.  In addition, one might see her murder of Bateman as a “human”act — she demands her freedom from imprisonment and secures her release.  But her punishment of Caleb Smith — she entraps him in the compound and abandons him to a potentially deadly end — seems “inhuman.”  So where does that leave us?  I find this text, like many others, to be suggestive but not prescriptive, and I am curious to see the other artifacts that my classmates produce and to read more/watch more in order to understand how posthumanism might be defined and challenged aesthetically.  I wonder, as I sit here, how we might understand posthumanism as related to information flow.  Are we MOOC inhabitants posthuman, in a sense, because of our ability to access and develop information flows in widely increasing networks and spaces?  Am I even understanding the terms?  I am looking forward to these and other discussions as we move forward.

3 Comments on "Ex Machina and the Posthuman"

Member
Haiyan Lee
I agree that “post” should not be taken solely in a temporal sense. As Sedlmayr suggests, modernist artists have been experimenting with the pre-human, ex-human, and trans-human for over a century, and not all are futurists. Narrative literature has an even longer lineage in probing the frontiers of humanity between animality, monstrosity, and divinity. I enjoyed watching Ex Machina. It reminds me of Robot and Frank. In both, the human characters become genuinely attracted or attached to the androids only when the latter acquire the ability to express moral sentiments and exercise moral agency, for good or for ill. It… Read more »
Vote Up0Vote Down  Reply

Member
J.J. Sylvia IV
Thanks for your post, I enjoyed it a lot! I also really liked Ex Machina, but I think you’re right in that it does reflect the difficulty in portraying the posthuman in popular culture. Cyborgs and androids both seem to be done very well, but the posthuman is more complex and subtle of a notion, and for that reason, I think it is much harder to depict on screen. I gravitate toward the perspective that we have always already been posthuman because of our use of tools and the lack of any true “essence.” The other thing you mentioned that… Read more »
Vote Up0Vote Down  Reply

Member
Zeynep Kubat
Thank you for this enjoyable post! I really agree with your viewpoint and it makes me think about the limits of language. There are so many theoretical terms that kind of mean the same thing and at the same time they absolutely don’t mean the same thing. Especially the domain of the posthuman studies can be very confusing sometimes, and I truly share your interrogations. Ex Machina was a film I enjoyed very much and it made me doubt the relationship between what we consider to be human or inhuman compared to the way in which reality can sometimes show… Read more »
Vote Up0Vote Down  Reply